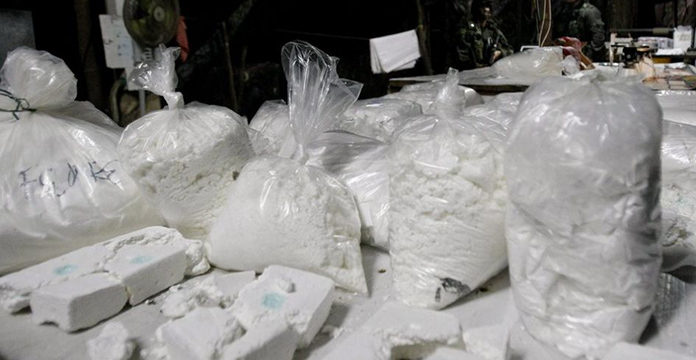 3,000 kilograms of Cocaine has been seized in this first week of August 2022 by the Guinean Maritime authorities inside as-yet-unidentified sea vessel(s) that anchored suspiciously off the shores of the Guinean coast. Five Sierra Leone citizens were arrested on board.

The identity of these five(5) Sierra Leoneans is as yet unknown.

Diplomatic sources at the Sierra Leone Embassy in Guinea tell our sources that the Embassy has not yet been formally informed of the exact identities of these five Sierra Leone citizens caught with the 3,000 kilograms of Cocaine.

The 5 Sierra Leoneans plus their Guinean accomplice and the Cocaine are all now detained at the headquarters of Guinean Police.

A Press Conference called by the Guinean Minister of Justice and the Head of Guinean Police Force affirm that an active investigation is going on to get more information as to where and to whom the cocaine is being taken to.

According to the press conference, the Guinean authorities have already tested the seized material and confirmed it to be Cocaine at the Guinean Police Laboratory.

The seized cocaine was also weighed and confirmed to be 3,000 kilograms.

At the Press Conference, the Guinean regime emphasised on the importance of fighting against international drug traffic especially coming from neighbouring countries.

They assert of how they are very proud of their Naval team for being very successful in guarding the territorial waters of Guinea.

It can be recalled that Sierra Leone in 2008 had seized 700 kilograms of Cocaine on board a flight from South America.

Cocaine is smuggled from South America to Europe through West Africa as a transit.

Reuters reports that last year, The Gambia seized nearly 3,000 kilograms of cocaine in one of the region’s largest hauls. Senegal also seized about 2,000 kg last year whilst huge quantities of cocaine were seized across West Africa in 2019, including 9,500 kilograms from a ship that docked in Cape Verde.