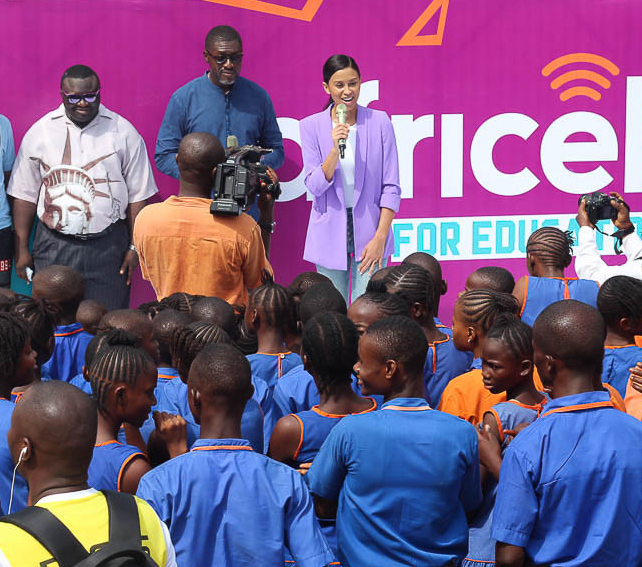 As part of its Corporate Social Responsibility, the management of Africell Mobile Company has given huge boost for the renovation and opening of Saint Luke’s Parish Secondary School at Wilberforce Military Barracks in Freetown.

During the opening of the school on Tuesday 18th October 2022, the First Lady of the Republic of Sierra Leone, Her Excellency Dr. Mrs. Fatima Maada Bio commended Africell Mobile Company for sponsoring the renovation and opening of the Saint Luke’s Secondary School. Her Excellency Mrs. Bio further called on the pupils to take their school work seriously. She expressed determination to continue to support young girls. The First Lady also encouraged parents and guardians to continue to take proper care of their children.  She further committed her office to continue to give her unflinching support towards the ‘Hands Off Our Girls campaign’. The First Lady warned against sexually assaulting the girls. She commended the judiciary for playing pivotal role in handling cases of sexual penetration against young girls in the country.

The Managing Director of Africell Mobile Company, Mr. Shadi Gerjawi, underscores that Africell has over the years identified Education as a key Corporate Social Responsibility pillar, adding that, which is why when we are approached to support the school projects, we respond without holding back.

And to sustain that,  he said that, Africell has invested not only in joint projects of this nature with learning institutions but have also provided basic computer programming education to students from primary to university level by hosting the first-ever coding boot camp in Sierra Leone. Recently, he said that, Africell has opened a learning center that will be used as a resource center to train and prepare future leaders.

“Let me add also, that the results from public examinations show that there has been a giant leap in the quality of education provided across the board and not just in Freetown,” stating further that, most significantly, is the fact that girls are emerging with some of the best results at all levels. We should be proud of them. He continued by stating that Africell is identifying with success by contributing to education and learning projects.

“To the parents, please ensure your children are sent to school. To the children, make great use of this opportunity, for it is said by the late Nelson Mandela, that education is the greatest weapon by which we can change the world,” said Africell Managing Director.

Representative of the school, Father Vincent Davies thanked the management of Africell for supporting the opening of the school. Father Vincent added that, since 2028, the education sector has been reformed. He further stated that His Excellency President Julius Maada Bio has made progress but stressed that more needed to be done in enhancing quality education across the country. He went on to say that every child deserves quality education. He also called on parents to play their role in mentoring their children’s performance at school. He added that the Catholic Church is working assiduously to collaborate with the government of Sierra Leone to change the world through education. He applauded the First Lady for her stance in promoting education in the country. He disclosed that during the commencement of the project to build the school they were faced with lots of challenges. He thanked Africell for supporting the renovation and opening of the school.

“But the timely intervention of Africell’s management has helped us to open the school,” he said. He appealed for more support towards construction of more classrooms.

Representative of Archbishop Edward Tamba Charles, thanked the Almighty God for seeing them through in establishing the Saint Luke’s Secondary School. He said that the Saint Looks Junior Secondary School resonates with the vision of the Catholic Church in promoting education in the country. He added that the Catholic Education is not just about passing information but it is about reformation of the person.

On behalf of the Ministry of Education, Madam Jattu Nattu stressed on the need to educate a child. She said that the Ministry of Basic and Senior Secondary School Education is determined to ensure that every child has the level playing field to be educated.  She lauded Africell for supporting the education sector.

The Director of Armed Forces Technical and Education College, Colonel Richard Bockarie thanked the Catholic Mission for the initiative in promoting education in the country.

“This is a life changing moment for our children who will continue the affairs of the state after our generation,” he said, stating further that, it is therefore important to appreciate those who have worked assiduously in building the school. He also thanked the government of Sierra Leone for the support in providing essential services in promoting free and quality education in the country.

He urged parents no to hesitate to continue to invest in their children, adding that, it is their responsibility to provide the needed opportunity to their children. He said that they will soon start a campaign on door-door search into houses in the Barracks for study tables, adding that, this is to ensure that pupils are well prepared for their exams.