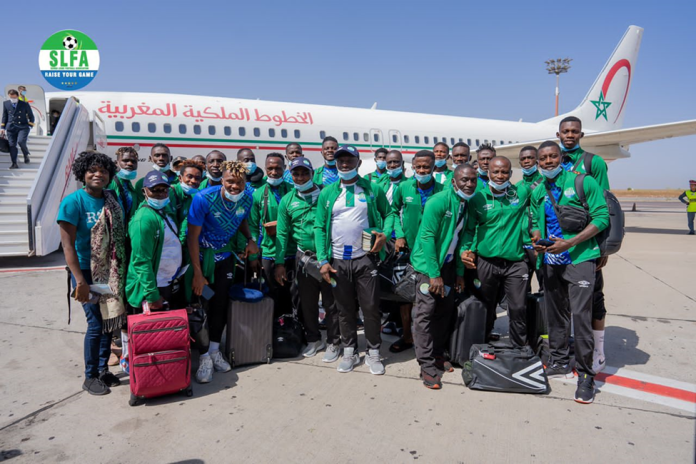 By Aminaash N.N. Brima Leone Stars home-based team headed by the National Home-based Coach Francis Zappa Koroma has safely arrived in Morocco on 20th July 2022, ahead of the 2022 CHAN Qualifiers against the Blue Sharks of Cape Verde

With a beam of excitement, agility, and seemingly spirited, the players expressed determination to win the double-header against the Blue Sharks when they arrived at the Mohamed V International Airport, Casablanca Kingdom of Morocco.

Sierra Leone is among nine teams in Zone A, battling to progress from the qualifiers to the finals of the forthcoming CHAN that will be hosted in Algeria in 2023.

Sports analysts have predicted a possible upset against Cape Verde after a seeming display of bravery among the boys to seek a place in the Total Energies Algeria Finals.

Coach Francis Zappa Koroma assured that the players were selected based on their outstanding performance during rigorous training sessions held in Kenema and elsewhere.

Against this backdrop, the Team Manager of Leone Stars Home-based, Alhaji Bah has vowed to give the team Ten Thousand United States Dollars if they win both matches against Cape Verde. This news was welcomed and appreciated by the players and many as it is a motivation and inspiration that could bolster confidence to exhibit the ‘Lions’ in them and defeat Cape Verde.

The first Leg between Sierra Leone and Cape Verde is scheduled to take place on Sunday 24th July 2022, whiles the second leg will take place on Wednesday 27th July 2022. Both matches will be hosted at the Grand Stade Marrakech in Morocco.