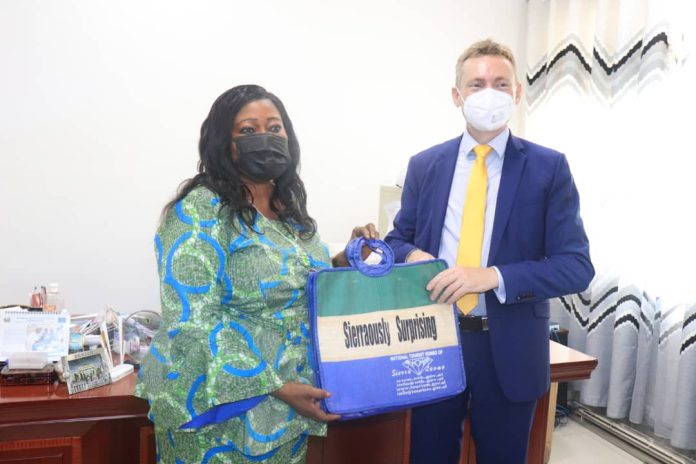 A delegation of the European Union (EU) to Sierra Leone led by Ambassador Manuel Muller have held talks with the Minister of Tourism and Cultural Affairs, Dr. Memunatu Pratt at the Ministry’s Kingharman Road Office in Freetown.

In his statements, the European Union Ambassador to Sierra Leone Manuel Muller said the EU is working with Sierra Leone in many fronts on sustainable development, and that they will be organizing beach cleaning on October 16th 2021 in partnership with the National Tourist Board (NTB) in order to protect the beaches, avoid plastic pollution, raise awareness on the importance of preserving oceans and foster community engagement in the efforts of cleaning the beaches as it is a global challenge, and looked forward to working with the Ministry in having a successful event.

In her submission, Minister Pratt welcomed the EU delegation to the Ministry while informing them that tourism is one of the economic diversification programmes of government and a very good income generation and job creation sector and lot has been done in the past three years to create the infrastructure and improve on international marketing by attending International Tourism Market in Berlin and other tourism conferences globally.

She said she had engagements with the Previous EU Ambassador, Tom Vens and they spoke about mutual support and cooperation from the EU to build on the tourism infrastructure with the idea of considering the sector for support in the 2022 budget year, emphasizing that the tourism sector needs more support in order to contribute more to the GDP and also to a number of issues in Sierra Leone as a continuing discussion with the outgone Ambassador.

She mentioned the latest international tourism conference she attended in Evora, Portugal which she participated in a number of sessions in supporting small countries like Sierra Leone in the area of tourism to address poverty reduction, climate change which she said is part of the Ministry’s programmes. She told the EU Ambassador that all the beaches across Sierra Leone are disturbed by climate change and waste pollution and the Ministry do not have standalone project to support beach cleaning, hence pleaded for other beaches across the country to be considered and requested for a standalone beach cleaning support for the Ministry of Tourism and Cultural Affairs. She called on the Ambassador to support the sector as it is very critical to providing jobs for many people.

The EU Ambassador applauded the Minister for attending many international conferences on tourism saying that it is important for the sector to have direct involvement of the international tourism actors to understand the situation on the ground while noting that the concerns for support of the Ministry have been noted.