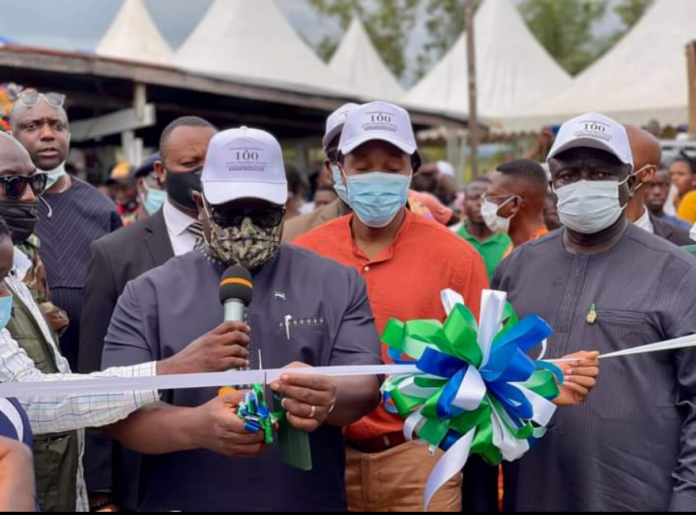 In a symbolic ceremony at Gerihun in southern Sierra Leone, the President of the Republic of Sierra Leone His Excellency Dr. Julius Maada Bio commissioned 100 junior secondary schools on Friday 10th September 2021.

The 100 junior secondary schools were constructed, upgraded and rehabilitated as part of the European Union support to the education sector in Sierra Leone.
The President came to power on the promise of Human Capital Development using education as a catalyst for the attainment of any nation’s development. It is against this backdrop that President Bio launched the Free Quality Education in August 2018, few months into his Presidency. To show his commitment to developing Sierra Leone through education, the President committed 21% of the nation’s budget to the education sector. Fees, text books, exercise books and other learning materials are provided by the government of Sierra Leone to encourage more enrolments in schools and enhance access to learning.

These positive strides have not come without its own challenges. The huge enrolment has created the need for more classrooms and conducive learning environments. Schools’ enrolment is getting huge by the day as a result of the Free Quality Education.

The government in solving this problem, through the help of European Union has built, rehabilitated and reconstructed 100 schools in the rural areas of 4 Districts – Port Loko, Bo, Bombali and Kenema.

The president in his speech expressed his delight with an unusual smile, in witnessing this progress under his flagship program the FQE, and thanked the European Union for their support. “People usually say I don’t smile often, but today I will smile because of this kind of development in Gerihun and other parts of the country. This is my dream and I am really happy. Education is the only tool to take you out of poverty,” an ecstatic President Bio said.

The President further encouraged the school going pupils to pay attention to their education as his government is committed to providing what is needed to enhance their education. He promised that, upto 500 schools will be built in two years time.

In terms of quality in our education, the President noted that it is a gradual process and cited the earlier release of results before reopening of schools as a sign of quality in the education sector. He pointed out the free of charge SMS result check for NPSE and BECE pupils which saved parents billion of leones.

“When I say education, it involves skills training and empowerment. This also helps to develop human capital,” said the President.

The Honourable Minister of Basic and Senior Secondary Education Dr. Moinina Sengeh thanked President Bio for his leadership and also thanked EU for their support. The Minister pledged that in 10 years time the FQE kids will record 100% pass rate.

The Director of the National Authorising Office, Mr. Ambrose James was delighted at the progress they have made in working with the EU to ensure they pull off this project. He called on the communities where these schools are located to take ownership and protect these schools.

Several other speakers including the Paramount Chief of Baoma Chiefdom PC Afred Demby, the Minister of Planning and Economic Development Dr. Francis Kaikai emphasised the importance of education. PC Demby thanked the President for choosing his Chiefdom to do this symbolic commissioning.

The program was climaxed with cultural displays and a tour of the school facilities by the President.