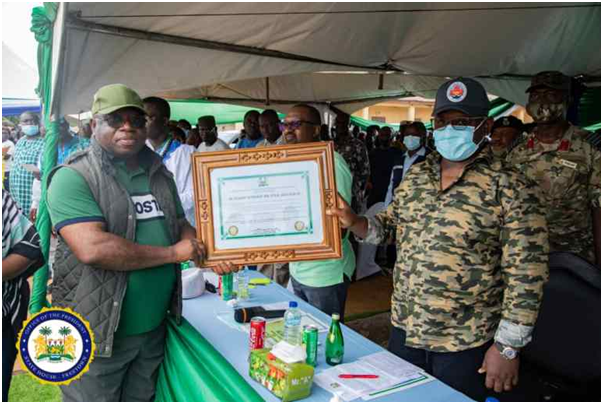 His Excellency President Dr Julius Maada Bio has given massive support to agricultural activities in the country by launching the $34.1 million Sierra Leone Regional Rice Value Chain Project in Torma Bum, emphasizing the need for food security in the country.

He told the gathering of locals, development partners and members of the Diplomatic and Consular Corps, the Islamic Development Bank and BADEA present at the ceremony in Bum Chiefdom, Bonthe District, that a well-nourished child or adult could stay healthy, live well, learn, fend for himself or herself and live a reasonably good quality of life.

“This project directly benefits 7,000 women and youth farmers, along with 35,000 farming families who are growing rice on 35,000 hectares of farmlands in the project locations. I am informed that the beneficiary identification and selection process was above board and merit-based.

“We came into governance to low levels of food security, even though we have vast stretches of arable land in this country, consistent rainfall and rivers, and fairly even weather conditions. The price of our staple food, rice, has not been stable and consistent on the world market. There had been no well-thought-out and sustainable investments in the agriculture sector. Food insecurity therefore persisted.

“Instead of taking short-term populist actions and granting massive import subsidies at the detriment of the economy or pronouncing an overnight reduction in the price of a bag of rice for political propaganda purposes, we decided to think very closely about a permanent fix…In order to strengthen the participation of the private sector, Government, through the Ministry of Finance and the Central Bank, has ring-fenced $50million to support private sector investments in agriculture,” he said.

The President also noted that because the country did not produce sufficient food for its population, the government had increasingly spent hundreds of millions of dollars every year to procure food from the world market. He added that a huge chunk of the country’s foreign reserves that could have been spent on education and healthcare among other urgent priorities for a developing nation, ended up being spent on importing increasingly expensive food items.

“In our governance assessment for our 2018 Manifesto and in our Medium-Term National Development Plan, we committed to working toward increasing the domestic production of food to significantly take care of our domestic needs and to ensure that the food produced domestically was available, affordable, and nutritious.

“We, therefore, decided on a well-thought-out, well-designed, well-implemented, and sustainable solution. We can transform our vast arable lands into massive food production centres and thus make our nation rice/food self-sufficient and also food and nutrition secure,” he said.

President Bio thanked the Islamic Development Bank and BADEA for examining his government’s plan, identifying with the objectives of their commitments, and sharing their aspiration to work towards domestic food self-sufficiency.

“As with everything we do as a Government, we have been very intentional in our planning so that when once we deliver this solution, it will be sustainable and long-lasting. Traditional subsistence farming of low-yield seeds in small plots will not lead to domestic food sufficiency. The answer is in increased mechanisation and larger acreage yields, more access to input, more advanced farming techniques, and more agriculture financing that expands private sector investments in agriculture,” he concluded.

Vice President Dr Mohamed Juldeh Jalloh, who chaired the occasion, earlier told the opening that the project was not only a dream come true for the President and his New Direction government but it was also a huge milestone for the country.

He said at its full operational capacity the project would minimise the large scale of importation of rice into the country and reduce cost on government, adding that the President made no mistake when he decided to invest in rice production and other food produce and made agriculture his top priority.

In his welcome statement, Paramount Chief Alex Maada J.J. Kainpumu II thanked President Bio for the opportunity he gave them to host the launch of such a huge project, adding for the first time any President and his wife the First Lady, the Vice President were visiting the chiefdom together and in one day.

He also assured of his people’s commitment to the project and promised that they would take it very seriously for the good of the country.

Minister of Agriculture, Forestry and Food Security, Abu Bakarr Karim, briefly reiterated that the project would provide job opportunities for the people and said he looked forward to exporting and easing the burden on government’s importation.

The minister also crowned President Bio as farmer-in-chief because of his tremendous support to the agricultural sector and declared the First Lady as agriculture champion. The ministry also recognised and presented certificates to farmers for outstanding achievements in the agriculture sector and encouraged them to continue for the good work.