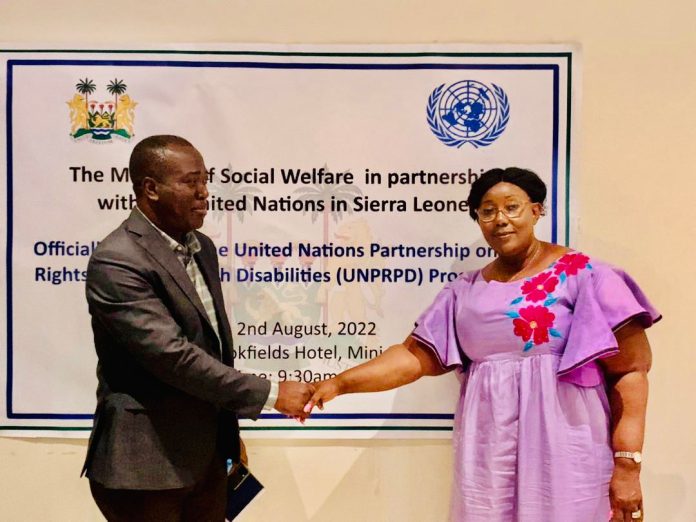 Speaking at the launch of the “Advancing Disability Inclusion in Sierra Leone” programme, done in collaboration with the Ministry of Social Welfare at the New Brookfields Hotel earlier in the day, the RC said the programme was made possible by the UNCT’s earnest pursuit of a funding opportunity provided through the global UN Partnership on the Rights of Persons with Disabilities (UNPRPD).

Mr. Ahonsi emphasised that partnerships will continue to be critical throughout the programme and, therefore, called for continued support in the areas of technical inputs to the design of new systems, compiling and sharing good practices, tracking progress on identified objectives, and raising awareness of disability rights.

He commended the Ministry of Social Welfare, Organisations of and for Persons with Disabilities, the NGOs, and UN colleagues, who contributed to the initial Expression of Interest and other elements of the inspection phase in 2021, which included Research and Report and development of the full proposal. Also, the RC stressed that the UN is committed to the success of the programme, especially the three implementing agencies – UNFPA, UNDP and UNICEF. The Country Representatives of UNFPA and UNICEF joined the RC with other UN personnel at the event.

In his statement, Mr. Vandy Konneh, Executive Director of Disability Rights Movement, commended the increased efforts from all stakeholders towards addressing disability-related issues. “Today, we can talk about cash transfer, the review of policies and most importantly, the implementation of the livelihood project”, Konneh said whilst referring to the UNPRPD as the “leading edge of the removal of barriers to people with disabilities.”

Officially launching the UNPRPD Programme, Minister of Social Welfare, Madam Baindu Dassama-Kamara, said the event was an outcome of the first ever expression of interest jointly developed by her ministry, the UN and other stakeholders. “This is an initiative to shift from reactive to more proactive, result-oriented programming to drive implementation of the UN Convention on the Rights of Persons with Disabilities and disability-inclusive SDGs with meaningful participation of persons with disabilities themselves”, she informed her audience.

The Minister also expressed the government’s appreciation to development partners, including the UN, for their remarkable contribution to processes that would advance disability inclusion across all levels of national development. “The launch of this partnership is a significant event as we gradually realise the prominence of disability in the UN agenda for sustainable development,” she stressed.

Sierra Leone was among the 26 countries in 2021 to receive funding from the UNPRPD on its fourth call to advance the Convention on the Rights of People with Disability and increase the implementation of disability-inclusive SDGs. In 2021, the UN worked closely with the Ministry of Social Welfare and Organisations of Persons with Disabilities (OPDs) to implement an inception phase of the programme, constituting an induction workshop on CRPD and SDGs, a country situation analysis, and the development of a full proposal for additional funding.

The Advancing Disability Inclusion in Sierra Leone Programme is a partnership of stakeholders, including the UN, Government, civil society and organisations for persons with disabilities, seeking to actualize provisions of the UN Convention on the Rights of Persons with Disabilities.