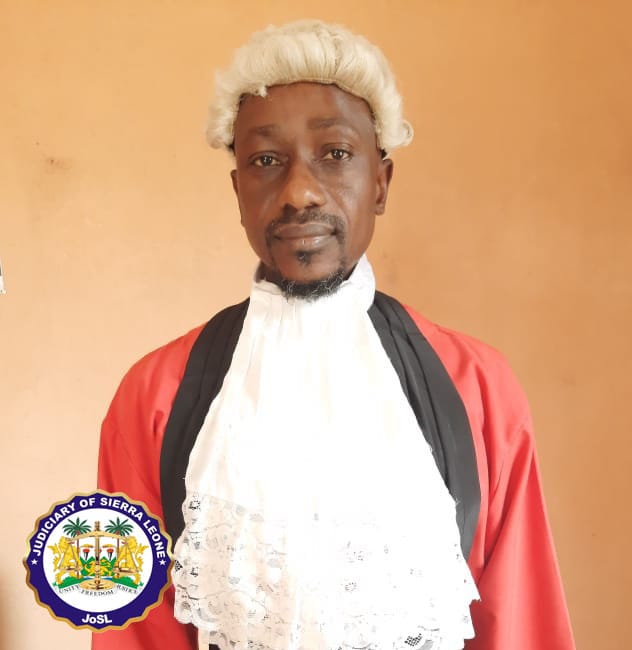 Judiciary of Sierra Leone Communications, Mongo Bendugu Town, Mongo Chiefdom, Falaba District, 21 October 2021: The Resident High Court Judge in Koinadugu District, Hon. Justice Abdul Rahman Mansaray, has commenced sitting on eleven (11) criminal cases at the Masabalia Court Barry in Mongo Bendugu in the ongoing High Court Criminal Sessions.
The High Court Criminal sessions are funded by the Judiciary with funds from the Government of Sierra Leone and aimed at taking justice closer to the people.
The eleven cases before the Court range from Conspiracy, Arson, Burglary, Causing Grievous Bodily Harm and five cases of Sexual Penetration including aggravated sexual penetration among others.

27-year-old Farmer, Salia Jawara, is before the Court to answer to four counts indictment of meeting a child with sexual intent, sexual penetration and other related offences.

Accused Salia Jawara denied the allegation upon his arraignment before the Court.

State Prosecutor, Augustine Y. S Mansaray made an Application for a trial by a Judge alone pursuant to Section 144 of the Criminal Procedure Act of 1965, instead of Judge and jury. The Application was granted.

The Prosecution alleges that the accused on the 31st of May 2021 at Firawa village in the Bawara Wollay Chiefdom, Falaba District in the Northern Province of the Republic of Sierra Leone met with two girls with sexual intent and sexually penetrated them.

Similarly, three accused persons; Kelie Koroma a trader, Ibrahim Kamara and Sulaiman Samura-power saw operators, were brought before the court on a two count of Conspiracy and Aggravated Sexual Assault.

All accused persons pleaded not guilty to the offences charged upon their arraignment.

According to the particulars of offence, the accused persons on diverse dates between the 30th day of May 2021 and 1st day of June 2021 at Kombili Village in the Morifindugu Chiefdom, Falaba District in the Northern Province of the Republic of Sierra Leone conspired together with other persons unknown to commit aggravated sexual assault and did engage in an act of aggravated sexual assault on 22-year-old Salamata Bah.

Also, 24-year-old Timber Labourer, Mohamed Barrie alias Tailor denied a one count of Burglary against him.
According to the particulars of offence, Barrie on the 15th May 2021, at Gbindi Town, Dembellia Senkunia Chiefdom, Falaba District, with intent broke in and entered into the house of Hassan Gbla and stole therein one Teckno Canon 16 mobile phone valued Le 3.500,000.

The week-long High Court Criminal sessions will end on Saturday with more prosecution witnesses being led in evidence in support of their cases.

Fellow Sierra Leoneans, In July of 2020, I proclaimed the conduct of a Mid-Term Population and Housing Census to be held in December 2020. That...
- Advertisement -