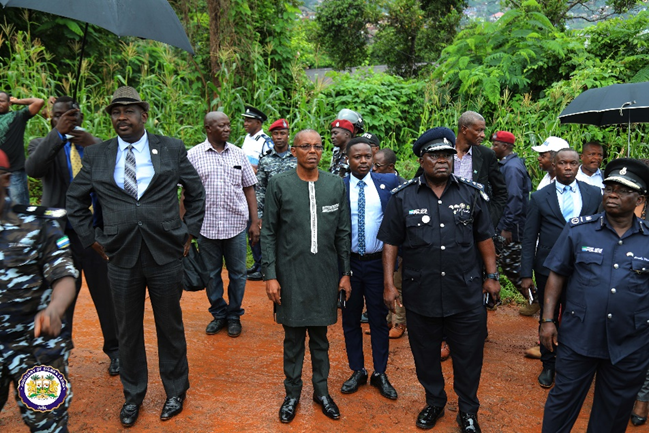 The Minister of Lands and Country Planning, Dr. Turad Senesie has urged illegal occupants at the Judiciary’s Quarters, Bell Air Park, Dwarzak in Freetown to immediately vacate the property/land.

He said the Ministry under his leadership didn’t allocate any land/property to any individual or group of persons. He encouraged them to prepare their minds psychologically in leaving the said land/property, adding that the Ministry of Lands will devise a relocation plan for only those who were mistakenly given legal documents by the Ministry.

The Inspector General gave a stern warning regarding his next visit to forcefully remove those land grabbers or illegal occupants.

According IG Sovula, the issue of land grabbing is a very serious one and therefore those illegal occupants at Bell Air Park should leave in peace rather than allowing the police to intervene.

The team comprising the Hon. Chief Justice, His Lordship Justice Desmond Babatunde Edwards; the Minister of Lands; Inspector General of the Sierra Leone- Ambrose Sovula; Deputy Minister of Works-Philip Tetema Tondoneh and some senior staf of the Judiciary toured the entire land/property to ascertain the veracity of the illegal occupancy.

The Hon. Chief Justice, His Lordship Justice Desmond Babatunde Edwards said before now the quarters were occupied by only Judges, Magistrates and staff of the Judiciary. He added that even former Chief Justices were staying there because the environment was peaceful and well secured to house them.

He stressed that it is now time to reclaim all the lands/property for the intended purpose.