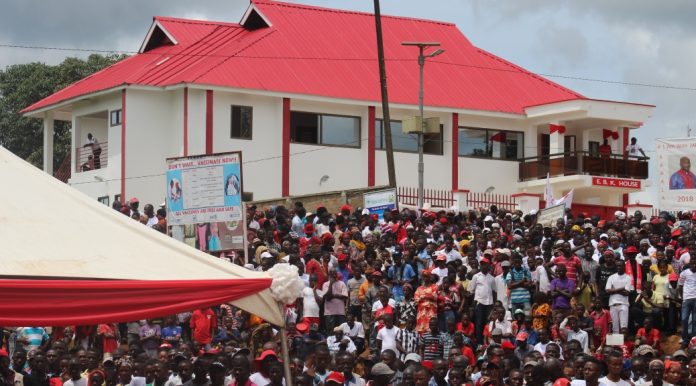 In an effort to lay the foundation for massive victory in Kambia District, Honorable KomborKamara former Member of Parliament has expressed his intention to contest for the Regional Chairmanship position of the All Peoples Congress Party in Port Loko District.

Honorable Kombormade this declaration on Sunday 9th January 2022, whilst engaging APC party supporters in Kambia District. This engagement was done in the typical APC fashion and in recognitions of party faithful.

Honorable Kombor highlighted the reasons for his declaration by stating that he has plans to bring the three sisters districts under one umbrella for the common goal of securing APC victory in the 2023 election. Hon. Kombor said North-West is a newly established district that needed the required leadership to compete with others and give the APC party a massive victory over others. He noted that most of the supporters did not know the current leadership due to ineffectiveness and lack of inspirations to galvanize support.

According to Hon. Kombor, the party needs an astute leader that is ready to lead in whatever situation and not a coward. He assures that he is always willing and ready to spend his resources and energy for the APC party.

“The time for fear is over,” the former MP noted, adding that they will not allow the party to go the wrong direction with a system that has positioned itself to intimidate members of the opposition. He also dilated on the peace among APCians in Kambia District and in the North-West Region. Hon. Kombor stressed that he’s a man who like change.

Hon. Kombor noted that the old system has changed and that power is now concentrateon the people, creating the opportunity for young people to own the duties and responsibilities of the party.

The aspiring Regional Chairman disclosed that he had provoked those at the helm of affairs to come out and work earnestly in the interest of the APC party. He stated that the people of Kambia should make it known that they are ready to make the change that would bring development to create the difference.

Hon. Kombor revealed that he had provided a functional recreational center for young people, places of worship, medical, transportation and among other things. All of these, he said, made him an outstanding candidate for the position.

Dr. AdikalieKabba dilated on the merits of Hon. Kombor, saying that he is a team player and could lead from all angles. He added that Mr Kombor is a fearless character and has sacrificed a lot for the APC party. He disclosed that the region needs someone that would halt the effort of the SLPP government in the north-West to deceive the people.