Information Minister: A Pillar and Transformer in the New Direction Administration 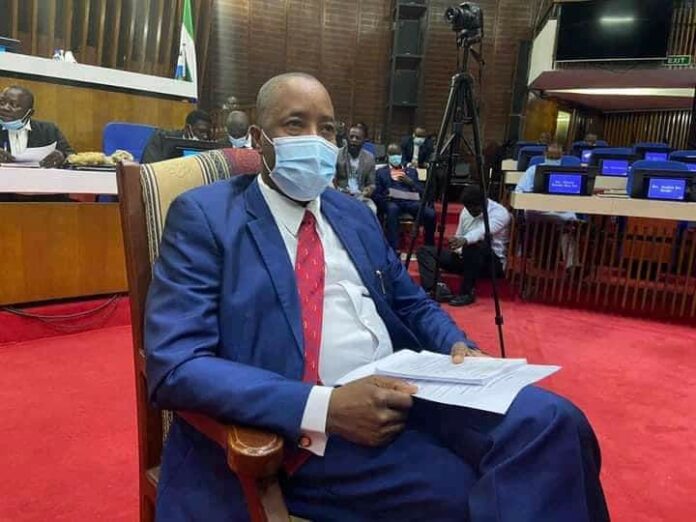 Hon. Mohamed Rahman Swaray has been carving a niche for himself in the Ministry of Information and Communications since he was appointed Minister in April 2018.

He has successfully transformed the Ministry into a 21st-century communication hub with brilliant innovations and ideas, including the enactment of a strategic statute that Sierra Leoneans would remember him for ages.

It was not a surprise to many who have been following Minister Swaray’s engagements with SLAJ, especially after President Bio promised to repeal Part 5 of the 1965 Public Order Act, which hindered press freedom and democracy in Sierra Leone.

Well, it was a promise during the electioneering process. Today, it is history; because the President, through his astute Information Minister, was able to fulfil that promise. President Bio has no doubt that Hon. Mohamed Rahman Swaray is working closely with the media; and as such, he will continue to support media development in the country and allow the press to be independent.

Posting of Information Attachés to all Diplomatic Missions

Since Sierra Leone returned to Multi-party Democracy in 1996, this is the very first time the country is having Information and Communication Attachés in all Sierra Leonean Foreign Missions.

Information is now under absolute control and is properly handled by well-trained Communication Specialists in these Embassies and High Commissions. Now, within a twinkle of an eye, information regarding activities in the various missions will be at your doorstep via social media and other platforms. All this is happening under the watchful eye and leadership of the Minister of Information and Communications, Hon. Mohamed Rahman Swaray.

Hon. Mohamed Rahman Swaray is the only Minister in the new direction government to have exposed corruption to the extent that two senior government officials in his own Ministry were tried, found guilty and jailed.

The New Direction Administration is the first to provide subvention to the Sierra Leone Association of Journalists (SLAJ) and work closely with the Association in everything aspect of media development.

Additionally, the government also engages SLAJ in every media policy and law under the leadership of Hon. Mohamed Raman Swaray.

Meanwhile, the first media cocktail for journalists in 2018 brought together the media and President Bio together; the annual event was a sign of appreciation to journalists despite the different views or headlines for or against the government.

The Minister of Information and Communications is the brain behind this important law. He held consultations with various stakeholders within the sector and was also there to ensure that the Bill is passed into law by Parliament.

The Sierra Leone Broadcasting Corporation (SLBC), whose operations were largely limited to Freetown, has been transformed tremendously with nationwide coverage as well as global exposure via Multi TV and social media. About a year ago, he donated cameras to the SLBC to improve their reportage as well as making their work easier.

Unlike in the past, there is now an uninterrupted power supply, live broadcast of public and national events with high-tech equipment.

The Sierra Leone Cable Network (SALCAB) is an institution that provides broadband internet services for the entire country but was poorly managed before the Minister took over the information sector under the leadership of President Bio.

According to Hon. Swaray, the move was part of the broader reforms in the communication sector in the country. “We want to inject private-sector kind of initiative into SALCAB. We are not selling it and this is not privatization. We want the private sector to play a key role in it that is why we are bringing in a private sector and management”, the Minister told journalists during the weekly Government Press Briefing in Freetown.

The reform strategy was about the unbundling of SALCAB and government privatising the ACE (Africa Coast to Europe) cable operations and establishing a clear regulatory framework for SALCAB since it’s a monopoly operator in the market.

SLENA operates the Sierra News Newspaper (formerly Daily Mail). Hon. Mohamed Rahman Swaray pioneered the refurbishment of the SLENA building into a spacious and well-equipped office for the day-to-day activities of journalists.

SLENA is currently headed by a woman-Yeama Thompson, depicting the Minister’s respect for gender equality in the media landscape.

The Review and Enactment of the new IMC Act

The Independent Media Commission (IMC) has been reformed and empowered to vet the registration and activities of media institutions in the country. Over the years, many media institutions registered with the commission but were not operating. But the new Act has restored parity.

The Minister held several consultative meetings with various stakeholders in the information sector to get the document validated and subsequently enacted by Parliament.

The National Telecommunication Commission (NATCOM) is the regulatory agency for all telecommunications networks in the country. It also provides frequencies to radio stations. Five new regulations were approved by Parliament to enhance service delivery by telecom providers and harmonize their operations for the benefit of the people.

Tremendous success has been gained through engagements with network providers in the country and the sector has been opened to other investors who may want to consider coming to invest in the country.

Development, they say, is a gradual process, and today success has been made in the sector as customers are enjoying the services they are paying for to the various networks in the country. NATCOM is also expected to move into their new office building this year.

Strengthening access to information is a key pillar in congealing state institutions to be accountable to the public.

It is as well beneficial to media practitioners who normally seek information from state or public institutions. Under the leadership of Hon. Swaray, this institution has been given full authorization to fine institutions who refuse to give information to journalists or the public who have requested it.

Dr Seaga Shaw who heads the Right to Access Information Commission (RAIC) practised journalism for several years. Pastor Mohamed Sesay is a Journalist and the West Region Chairman of the RAIC.

Minister Swaray made sure journalists are part of the process just to know how serious he takes the media.

Minister Swaray wanted to bring government activities closer to the people, so he set up the Strategic Communications Unit in the Ministry of Information and Communications.

The Unit has been helping in disseminating vital information to the public through radio, television and social media.

Strong men and women were employed to bring every bit of government activities closer to the people, and Sierra Leoneans have praised the work they are doing under the astute leadership of Mohamed Rahman Swaray.

The Minister believes in decentralization, so he introduced the Regional government press briefings in order to inform the people about happenings in the country.

This has closed the information gap in the provinces because people are now informed about government activities on a weekly basis.

Facelift of the Information Ministry

The Ministry of Information and Communications has been given a facelift under Minister Swaray’s administration.

The offices have been upgraded to a modern facility. The Conference Hall, where the Weekly Press Briefing, is held is now a State-of-the-Art facility. Journalists who go there every week have showered praises on the Minister for making the hall very comfortable and entertaining.