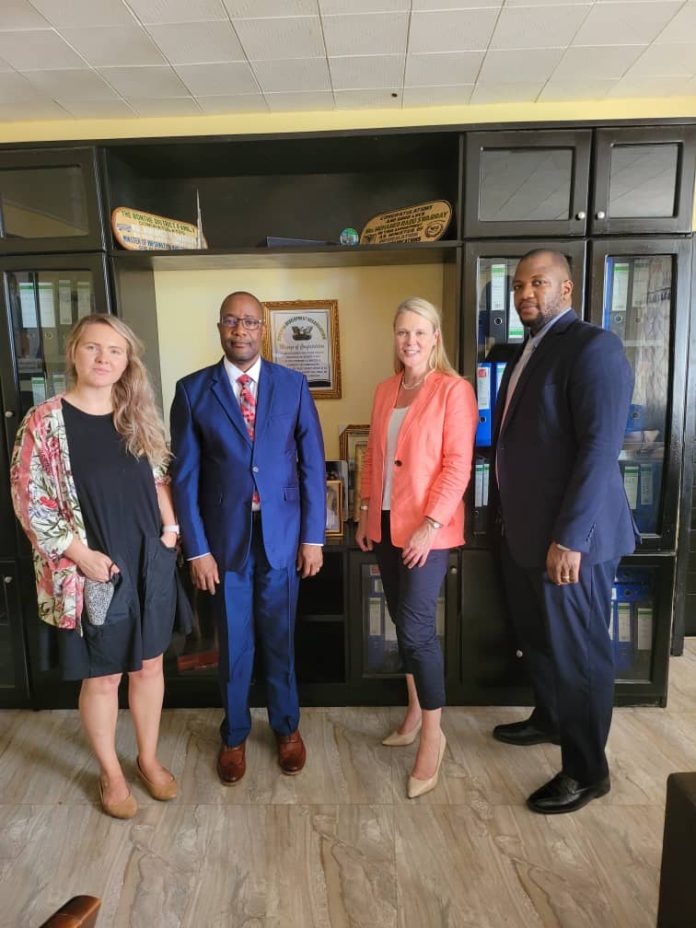 The British High Commissioner and team were warmly welcomed by the Minister as they discussed government’s interventions in improving media freedom in Sierra Leone.

Sierra Leone and Britain have enjoyed long standing bilateral fraternal ties and cooperations geared towards promoting the socio-economic development of both countries.

In her statement, the British High Commissioner commended Sierra Leone for being the 5th African country to join the Media Freedom Coalition which according to her is a big step in the right direction. She applauded government’s bold steps in repealing the criminal libel law, abolishing the death penalty, strengthening the IMC act and enacting the Cyber Security and Crime Act.

The High Commissioner who was not around when the Cyber Security and Crime act was enacted was curious to know more about it, which the Honourable Minister took the opportunity to enlighten her on the processes which the bill underwent before it was eventually passed into law.

Minister Swaray explained to her about government’s continued commitment in protecting press freedom, privacy and Human Rights of citizens. The Minister said, more than 80% of the population are connected through mobile voice and 25% are either on one social media platform or the other. “The government didn’t want to leave that space unattended to owing to the fact that the cyber space is now prone to all kinds of abuse and threats,” said the Minister.

Mr. Swaray informed her of thorough consultations with stakeholders and the eventual passage of the Bill with a clean bill of health which got endorsement fron all political parties in Parliament.

The Honourable Minister assured Lisa Chesney that after the President would have assented to the Cyber Security and Crime Act, there will be massive sensitization all around the country to keep the citizens abreast of the act.

Lisa Chesney asked the Minister what kind of Sierra Leone he would want to see after signing up to the Media Freedom Coalition, to which he responded by saying “this is a country where His Excellency the President Dr. Julius Maada Bio is known globally as a champion of free speech so I want to see Sierra Leonean remains so. A nation where journalists practice freely that is why the IMC act is callings for journalists to be paid just to improve their work.”

Both of them spoke briefly about climate change and COP 26 which will be held in Glasgow. The High Commissioner said Sierra Leone will be presented with the opportunity to tell the world their own story on climate change.