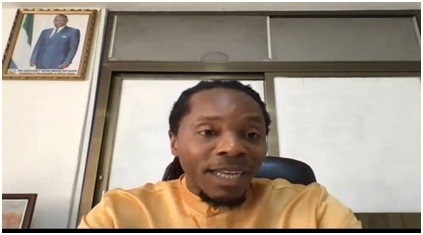 According to the minister, three years after the introduction of the Free Quality School Education, Sierra Leone has simultaneously improved access, quality and gender equity, noting that and all this against the backdrop of COVID-related school closures.
On access he said, between 2018 and 2020, MBSSE added more than 700,000 new learners to schools and the Ministry achieved this while attaining gender parity in enrollment at nearly all levels.

“We have more girls than boys in primary and junior secondary schools. We are actively working to improve the transition of girls into senior secondary and into tertiary and higher institutions,” he said.
On quality he said, MBSSE now have more students sitting and passing the national transition exams than at any point in our country’s history, adding that for junior secondary school the Ministry has been able to improve the pass rate from 72% to 79% in three years while adding more than 40,000 students to the examination roster.
“Albeit hard, we are seeing that it is possible to achieve quality while expanding access. We have also made significant headway on our early grade reading and math assessments, known as EGRA/EGMA. I am proud to say that across nearly all reading and math tasks, we have cut the percentage of students who score zero in half since the last assessment in 2014,” he said. Minister Sengeh said Sierra Leone is able to get this far because they invested in education, noting that government pays the full bill for school fees in public schools and pay the examination fees for nearly all students and moreover, they have hired more than 12,000 teachers, increased all teachers’ salaries by 30% and doubled down on continuous professional development.
He said the government has invested in new teaching and learning materials and school feeding programs. We believe that children must have access to nutritious meals for learning and their holistic development. We have created a new set of curricula relevant for the 21st century at all school levels.
“Furthermore, we innovated. For example, we introduced digital, SMS-based learning tools, including a free SMS dictionary. Students can now check their exam results and school placement on their phones instead of waiting for the paper results to travel to their schools. Our digital tools have been used millions of times. Just recently, we introduced the Learning Passport that gives students access to past exam papers. On the first day it was downloaded 4,000 times,” he said.
He said Sierra Leone has laid the policy groundwork for education to improve on all fronts, for example the Radical Inclusion Policy ensures the inclusion of girls, especially pregnant ones, disabled learners, learners from remote areas and learners from impoverished backgrounds in the education system.

He said this year, Sierra Leone will update the Education Act of 2004 to match the country’s aspirations.
He said Sierra Leone is spending 22% of its national budget on education, adding that they have made hard choices to protect this budget, and confident that Sierra Leone will reap the rewards for decades to come.

“This has been our journey, but we are very far from finished. How can the United States help accelerate progress? I serve as a board member in the executive committee of the Global Partnership for Education, and I believe that this is the best vehicle for pooling international efforts to accelerate progress toward our common education goals,” he said.