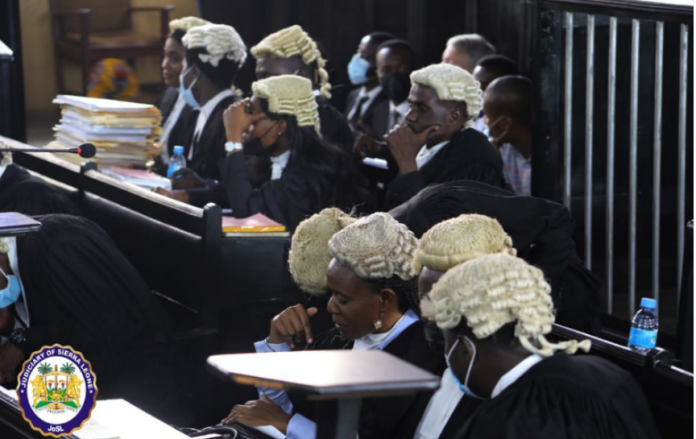 Today’s ‘High Court Call Over’ looks into cases which have gone through Preliminary Investigations at the Magistrates’ Court and have been sent to the High Court for trials as well as fresh indictments from the Law Officer’s Department for onward assignment to various judges.

53-year-old Pa Sorie Sesay and 22-year-old Mason, Abdulai Kamara were before the court on a one count indictment of Store Breaking and Larceny.

The particulars of offence state that the convicts on the 11th day of November, 2020, at Waterloo in the Western Area of the Republic of Sierra Leone broke and entered into the store of Fatmata Fofanah and stole therein one Metal Steel Door valued One Million Two Hundred Thousand Leones (Le1,200,000) being the property of Madam Fofanah.

After the charge was put to the accused persons, they pleaded guilty to the offence as charged.

In his allocutus, Pa-Sorie Sesay pleaded for mercy and stated that he has two children to look after.

On his part, Kamara also pleaded for mercy, stating that he has a 6-month-old baby to fend for.

In his plea mitigation on behalf of both accused persons, Lawyer M. Karimu, from Legal Aid Board said because the convicts didn’t waste the court’s precious time and are both parents, the Honourable Judge should temper justice with mercy.

In his sentence, Hon. Justice Sesay sentenced them to five years imprisonment each including time already spent.

The Hon. Judge also ordered that the one Metal Steel Door be given to Madam Fofanah.

During the course of the session, a number of accused persons were admitted to bail for offences ranging from Conspiracy to commit larceny of Cattle and Wounding with intent.

Bench Warrant was also issued to accused persons admitted to bail and couldn’t come to Court.