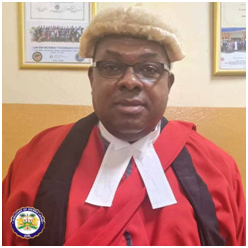 Count one as indicated on the face of the indictment records failure to comply with applicable procedures and guidelines relating to Procurement contrary to Section 48 (2)(b) of the Anti-Corruption Act No. 12 of 2008 as amended by the Anti-Corruption Amendment Act, No. 9 of 2019).

Dr. Samura Kamara, of No. 41 Tarawalie Drive, Malama in Freetown in the Western Area of Sierra Leone, being a former Minister of Foreign Affairs and International Cooperation is alleged to have on a date unknown between the 1st day of January 2016 and the 30th day of April 2016, deceived his principal, the Government of Sierra Leone, by giving to the Cabinet a Cabinet Paper document that he knew contained a misleading statement to wit, statement that, “The Companies undertaking the renovation or constructions are reliable and were subjected to a rigorous vetting process.”

Upon their arraignment, all accused persons denied any wrongdoing.

The accused persons were represented by a battery of lawyers with the exception of the 6th accused who is not represented at this stage.

Each property must be registered in the name of the surety in the office of the Administrator and Registrar General and must be free from all encumbrances. Each surety must surrender the originals of all title deeds to the office of the Master and Registrar and must produce a valuation certificate confirming the valuation of the properties to be used, which must be dated within the past three months.

Justice Fisher ordered each accused person to surrender all travelling documents to the office of the Master and Registrar, forthwith as well as not to conduct any interviews with the press or comment publicly on proceedings until the end of the trial.

He used the occasion to admonish the press and members of the public to only report accurately what obtains in court in terms of the evidence given in the proceedings in general and nothing else.

“Any reporting calculated to interfere with the course of this trial would be treated as contempt of this court for which there would be penalties,” Justice Fisher warned.

Before the close of official hours today, 3 of the accused persons fulfilled their bail conditions with the exception of 3rd accused, Foday Vahfomba Bawoh, who has been sent to the Male Correctional Center.

The matter has been adjourned to the 5th of January for pre-trial proceedings.