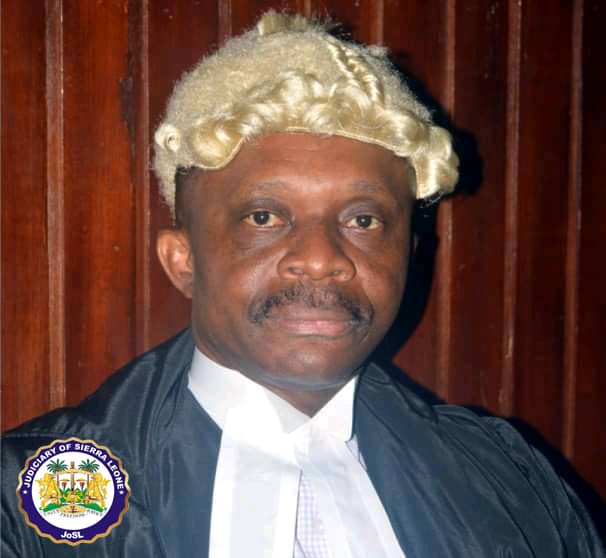 “In the circumstances I refuse a reconstitution of the declaration of rights meeting, the granting of an injunction against the swearing of the 5th respondent as paramount chief of Sambaia Chiefdom,” he declared.

The ruling follows a Petition dated 10th June 2021, filed before the court by Lawyer Samuel T. M. Navo on behalf of Nine (9) Petitioners who claimed to be chieftaincy aspirants seeking an interim interlocutory injunction against the swearing in of the 5th Respondent (Hon. Foray Jalloh) as Paramount Chief of Sambaia Chiefdom pending the hearing and determination of this Petition.

They prayed that the Honourable Court orders reconstitution of the Declaration of Right Meeting and due process be followed.

The Petition which was supported by several exhibits also sought for the court to order a return of the Paramount Chieftaincy Elections following proper and legal process.

Lawyer Samuel. T. M. Navo representing the Petitioners raised a couple of objections, sought for a number of adjournments on grounds that he shall file documents in support of the case of the Petitioners which was never honoured.

In what the Hon. Judge referred to as a “mere ploy or trick to delay further hearing and determination of this case by the conduct of Counsel representing the petitioners,” he stated that, “I also took into consideration the fact that justice delayed is justice denied, and I ordered that the case for the Petitioners be closed.”

With this decision, Counsel for the Respondents, E. Sarkoh, opened their case by leading two witnesses in evidence and informed the court that he relied on his affidavit in opposition earlier filed together with exhibits attached.

In a joint report by the Provincial Secretary, North Eastern Province and the NEC, the highest number of votes cast were in favor of Hon. Foray Jalloh, representing over 55% to prevent a run-off.

The 1st to 9th Petitioners who were not satisfied with the conduct of the elections filed a petition in respect of same.

After the announcement of the election results by NEC, the petitioners questioned the process and alleged that it was marred by violence and anti-democratic principles.

They alleged that the 1st, 2nd, and 3rd Petitioners were denied the right to contest the Paramount Chieftaincy election of Sambaia Chiefdom even when they presented both documentary and oral evidence to show that they hailed from established Ruling Houses and had paternal links to the throne.

Counsel representing the Respondents argued that there were no thugs nor any evidence of disruption during the declaration process.They further argued that it was not true that the NEC did not conduct a verification of the list of the Tribal Authorities, adding that there was adequate security as the security was boosted by Bumbuna, Magburaka and Bombali police personnel.

Delivering his judgement upon review of the evidence before the court and in the absence of any evidence led before the court by Counsel for the petitioners since the inception of the matter in support of their case, Hon. Justice Allieu ordered that, “the matter is struck out and that Hon. Alhaji Musa Bamba Foray Kulio Jalloh be sworn in as Paramount Chief of Sambaia chiefdom in order to enable him freely carry out his functions as Paramount Chief Alhaji Musa Bamba Foray Jalloh III of SambaiaChiefdom, Tonkolili District in the Northern Province of the Republic of Sierra Leone.”