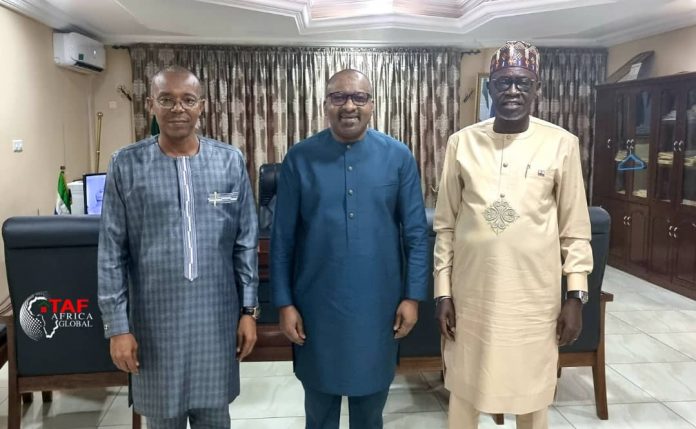 Whilst in the country, Mr. Njie met with the Vice President of the Republic of Sierra Leone, held critical and extensive consultations with the Minister and senior management staff of the Ministry of Lands Housing and Country Planning, in addition to visiting possible investment sites in various parts of Sierra Leone.

This was culminated by the signing of a Memorandum of Understanding (MOU) between the Government of Sierra Leone and Mr. Mustapha Njie’s TAF Africa Global Real Estate Company that is on a mission to construct One Million affordable homes in the African continent within the next twenty years.

Sierra Leone is in line to be the Ninth (9th) country to benefit from this investment.

During the site visits, Mr. Njie was wowed by the beautiful landscape of Sierra Leone and has vowed to be part of President Bio’s development agenda, especially in the housing sector.

The investor has made a commitment to develop micro-cities in Sierra Leone as part of the affordable housing agenda led by the Ministry of Lands, Housing and Country Planning.

According to him, his company is ready to undertake this investment with zero financial burden on the Government of Sierra Leone.

“I am finally here to answer to the clarion call made to me some two years ago by His Excellency the President of the Republic of Sierra Leone during the time he visited The Gambia and saw my investments,” Mr. Njie disclosed.

He made a commitment to capacitate and work with a staff base of mainly Sierra Leoneans throughout the project, noting that the same has been the status quo of his projects in other countries.

The Minsiter of Lands, Housing and Country Planning, Dr. Turad Senesie disclosed that this affordable housing project would be used to showcase the President’s dream to build micro-cities across Sierra Leone.

“It’s a new direction now in the Ministry in line with the President’s agenda, with the provision of affordable housing taking center stage,” he pointed out.

He used the forum as an opportunity to disclose that his administration is attracting and restoring investors and development partners’ trust in the Ministry, while citing that the World Bank has approved a Forty Million Dollar grant to support the sector.

“There is going to be a new era, a new focus and we are going to have new communities and cities across Sierra Leone. To showcase that, TAF Africa Global is going to be right at the forefront,” the Minister emphasised.

The MOU signing is an indication of the seriousness government attaches to provide affordable housing for its citizens, the Minister stated.

Dr. Senesie ended by narrating the evidence of seriousness of the Mustapha Njie’s investment he witnessed in The Gambia which he hopes to replicate in Sierra Leone.

He assured Sierra Leoneans that TAF Africa Global would soon commence physical work in Sierra Leone, noting that this could happen before the end of 2021.