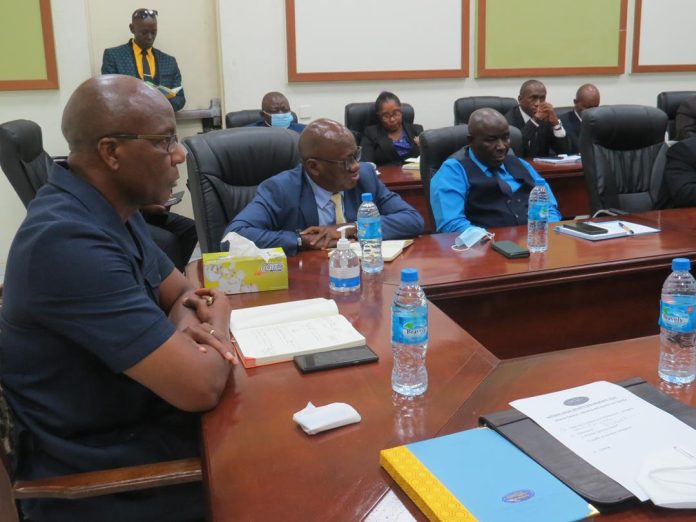 The Director General of the National Social Security and Insurance Trust, Mohamed Fuaad Daboh, on Monday 7th March 2022, received a nine-man delegation from the Social Security and Housing Finance Corporation (SSHFC) of The Gambia at the Conference room of NASSIT’s headquarters at Walpole Street in Freetown. The Gambian delegation is in Freetown on a week-long study visit to the Trust.

Addressing the delegates, the Director General expressed his appreciation to the team for choosing NASSIT for an experience-sharing tour, saying that it showed how far NASSIT had gone in the sub region in terms of social security administration, and the kind of relationship that existed between Sierra Leone and The Gambia.
According to the Director General, the synergy between Sierra Leone and The Gambia spanned far back to colonial days when both countries were under British rule, adding that both countries had taken full advantage of that historical link to support each other in times of need.

Briefing the team on the development of the scheme, Mr. Daboh intimated that the Scheme had a mandate to administer Sierra Leone’s National Pension Scheme by providing retirement and other benefits to meet the contingency needs of workers and their dependants, noting that membership was compulsory for all workers in the formal sector, and voluntary for the informal sector.
He disclosed that, as Director General, his strongest desire had been to re-direct the institution to its core business of operations and benefit payment.
“This desire,” Mr. Daboh said, “has been the driver to the huge transformation the Trust has envisaged.”
The Director General went on to tell delegation that the Trust was undertaking three major infrastructural systems, namely, the Pension Administration System (PAS), the Biometric Registration System (BRS) and the Electronic Records Management System. “These three projects are geared towards establishing an enviable platform for pension administration in the country,” he affirmed, adding, “there is no best time to visit NASSIT than now, as this will give you first-hand experience and information in your areas of interest”.
He assured the Gambians that his team would give them the required attention to make their visit worthwhile.

Speaking about the purpose of their visit, the head of the delegation, Doduo Jain, on behalf of his management, expressed gratitude to the Director General and Management of NASSIT for hosting them on their study tour. He stated that their nine-man delegation was carefully selected from various departments in their institution so that they could have exposure to the transformation that had taken place at NASSIT to enhance their functionality. He stressed that the composition of their team was deliberate with the aim of understanding the change process at NASSIT, which would assist them in their transition period.

The team, according to Mr. Jain, would focus on information technology, archives, data management, and compliance, saying that these were very critical areas in Social Security Administration and that they would like to have the NASSIT experience firsthand, and also strengthen the collaboration between the two institutions. He concluded on a note of confidence, expressing that the hospitality demonstrated so far had assured them of a wonderful experience ahead.

The delegates were allocated to various divisions and departments according to their needs and expertise.