NDMA responds to climate and fire incidents in Port Loko and Kerene Districts. 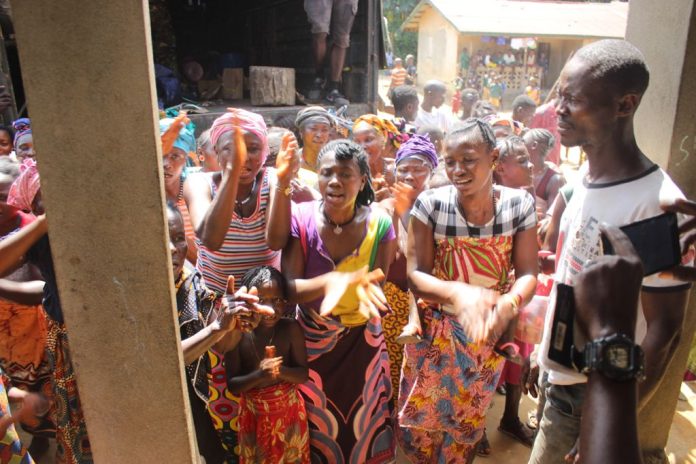 Director-General of NDMA, Lt Gen (Rtd) Brima Sesay, said the incidents occurred in June, and the Agency conducted an assessment of the situation to get a clear picture of the damages suffered.

He said NDMA has attended to incidents all over the country, adding, and “The support that NDMA implements, comes directly from the government”. He said environmental issues are of great concern, and people should stop felling trees in their communities. “Without tree covers the communities will face serious threats”, he added.

Director of Relief and Response, Sinneh Mansaray said the Agency established that people in grief need to be supported. He admonished the community people where the fire incident occurred – Yakibar- that they have the responsibility to prevent fire outbreaks. He called for the replanting of trees in areas that have been rendered bare by logging or felling of trees for domestic use.

According to the Deputy Director of Morlu Brewah, the government cares for its people and their livelihood, which is the role of NDMA, to support the lives of people in dire need to sustain their livelihood.

Beneficiaries in the different villages hailed the Government initiative to come to their rescue, thanking NDMA and the response team for bringing them aid that will transform their lives for good.They recounted their ordeals, describing the support as ‘timely’.

Isatu Tarwawelly, a beneficiary at Makoya village, expressed her delight. She said the incident left their homes roofless, and didn’t cross their minds that help would arrive soonest. Today, they are happy that have finally supported.

Another Victim of the disaster, Alusine Koroma, said the disaster destabilized their livelihood, but with this intervention, their lives will go back to normalcy.

Over the last months, high winds and fire outbreaks destabilized livelihoods and schooling in communities in the Northern Province of Sierra Leone and other parts of the country. The kankaley Primary School at Madick lost its roof to the wind and caused the suspension of classes

Today, the communities and the school have received assistance which has restored normal operations.

The NDMA is assuring the public of its continued commitments to preventing disasters and efficiently manage and/or respond to disaster incidents in the country.