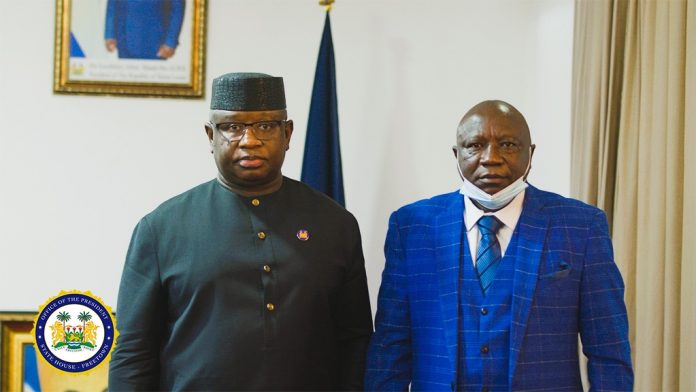 State House, Freetown, Thursday 10 February 2022 – The new National Security Coordinator at the Office of National Security, ONS, Abdulai Caulker, has subscribed to the oath of office before His Excellency President Dr Julius Maada Bio, during a short ceremony at State House.

Mr Caulker said with distinct pleasure he was going to serve in what he called a distinguished position as National Security Coordinator, adding that they would work hard to keep and maintain the high standards at the institution.

He further assured that he would work with his colleagues to make sure they live up to the confidence reposed in him and assured President Julius Maada Bio that they would produce positive results and in the best interest of the country.

”As we move closer to elections year, we will always act promptly to create an enabling and peaceful environment. I want to assure Your Excellency that the security sector will behave honourably,” he concluded.

In a brief statement, His Excellency President Dr Julius Maada Bio congratulated the new National Security Coordinator, saying that he was fully aware of the enormity of the task ahead of him. He noted that the new coordinator was not a stranger at the institution.

He called on him to prepare as the country moved into electioneering year, noting that the ONS was to work collaboratively with other sectors to provide the necessary peaceful environment in every part of the country.

“Rest assured that you have my full support. Congratulations once more and thank you,” he concluded.