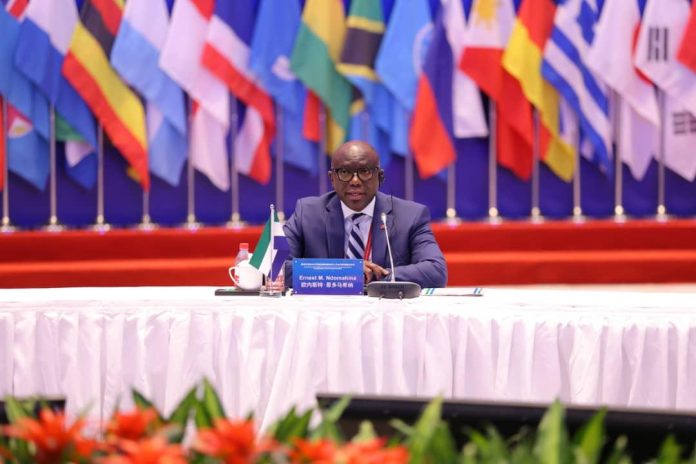 Sierra Leone Ambassador to the People’s Republic of China, His Excellency Ernest Mbaimba Ndomahina has participated in this year’s Global Conference on Aquaculture recently held in Shanghai. Furthermore, the Ambassador Extraordinary and Plenipotentiary was scheduled to deliver the keynote address on behalf of the Sierra Leone Minister of Fisheries and Marine Resources.

Delivering his statement, Ambassador Ernest M. Ndomahina started by commending stakeholders for successfully hosting the Conference despite current difficult circumstances created by the COVID-19 pandemic. He went on to say that the Conference consolidates credentials of South Island, China (Shanghai) Pilot Free Trade Zone. He thanked them for the opportunity extended to Sierra Leone to participate.

Ambassador Ndomahina recalled that Sierra Leone and China in 2017 signed a Memorandum of Understanding (MOU) on Cooperation in Fishing and its related activities, maintaining Sierra Leone’s commitment in the implementation of the said MOU regardless of the fact that other important elements of the agreement like the development of aquaculture are still pending.

“Therefore, I am highly optimistic that this high-level meeting on South-South Cooperation will pave the way for addressing some of the challenges of aquaculture development in Sierra Leone”, Ambassador Ndomahina averred. He furthered that Sierra Leone relies heavily on her coastal and marine fishery resources for the supplying of fish in the domestic market. Adding, fishery resources represent an important source of protein for over 80% of its population and also a source of export earnings, employment and income for local stakeholders.

Ambassador Ndomahina candidly disclosed that the Sierra Leone aquaculture is underdeveloped compared to other West Africa Countries due to large-scale destruction the sector suffered during the Country’s civil conflict. But he was quick to point out that the Government of His Excellency, President Dr. Julius Maada Bio is committed to rehabilitating the sector’s main assets at Makali and Bo located in the North and South of Sierra Leone.

Ambassador Ndomahina expressed hope that the conference will help address issues in aquaculture development with the view to balancing economic development and environmental protection, thereby ensuring improvement on scientific and technological innovations. “It will also include issues like food safety, trace ability, climate change, Gender and Youth issues in the aquaculture sector.” Ambassador Ndomahina added.

Concluding, Ambassador Ndomahina extended thanks and appreciation from His Excellency, President Dr. Julius Maada Bio and the Government of Sierra Leone to the Government of the People’s Republic of China including the Food and Agriculture Organization for their unflinching support.

He mentioned the recent Chinese support of a Fisheries Research Vessel for Fish Stock Assessment and the support for the construction of a Fish Harbor that Sierra Leone has been struggling to get over the years. He sends out special thanks and appreciation to the Food and Agricultural Organization (FAO) for the support on aquaculture development and sustainable small-scale fisheries with particular support to the women in fisheries.