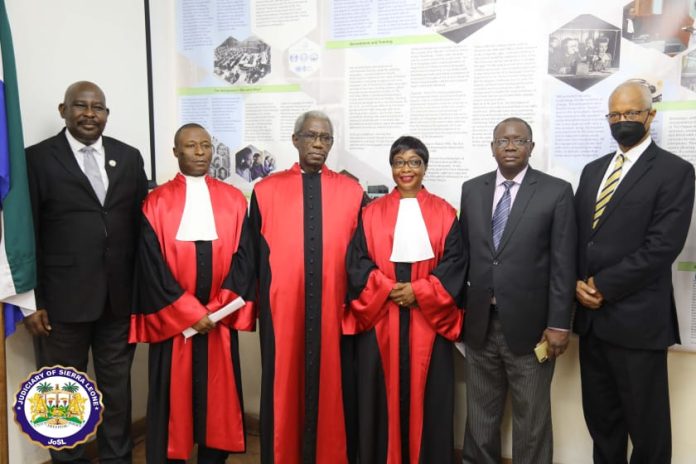 He continued to note that the two new Justices are succeeding the late Justice John Bankole Thompson, who passed away in May 2021 and Justice Miatta Samba (JSC), who was elected in 2020 as a Judge of the International Criminal Court.

Hon. Justice Jon Kamanda added that the ongoing legal obligations of the Special Court include the supervision of prison sentences, witness protection, maintenance and preservation of the archives and assistance to national prosecution authorities among others.

While he congratulated the appointees, he urged them to work in accordance with their solemn declaration as laid out under Rule 14 (A), to serve “honestly, faithfully, and impartially and conscientiously” as Judges of the Residual Special Court.

The Registrar of the Special Court For Sierra Leone, Binta Mansaray thanked the Hon. Chief Justice, the Attorney General and Minister of Justice and current Judges of the Court for sparing their time to grace the occasion.

Hon. Justice Alusine Sesay (JSC) has been a Judge in the Sierra Leone Judiciary since 2007, when he was appointed resident Judge in the Northern Province.

He was appointed High Court Judge in 2009. From 2004-2006, he served as co-Counsel and case manager in the Special Court For Sierra Leone trial of The Prosecutor Versus Sam Hinga Norman and others.

From 2004-2006, he was employed as consultant State Counsel attached to the Director of Public Prosecution, in the office of the Attorney General and Minister of Justice. In  2019, he became a Supreme Court. He is a graduate of Fourah Bay College, University of Sierra Leone, and was enrolled as a Barrister and Solicitor of the High Court in 1992.

Justice Sesay is a tutor at the Sierra Leone Law School and also a member of the Council of Legal Education. He is an alumni of the Law Enforcement Academy (ILEA) in Botswana.

Hon. Justice Tonia Barnett has been a Judge in the Sierra Leone judiciary since 2006. From 2006-2008, she was a Circuit Magistrate of the Kenema Judicial District and its environs. From 2011-2017, she served as Senior Magistrate in the Judiciary of Sierra Leone. From 2017-2020, she was a judge of the High Court and later appointed as Court of Appeal Judge in 2020.

She earned a Bachelor of Laws Degree from Fourah Bay College, University of Sierra Leone in 2004 and graduated from the Sierra Leone Law School in 2005. In 2016, she received a Master of Laws (LLM) degree in Women’s and Children’s Rights from Harvard Law School.

This is not the first time that Sierra Leonean judges have received international recognition and appointment under the leadership of His Lordship Justice Desmond Babatunde Edwards, with the recent being the appointment of Justice Miatta Maria Samba   to the ICC.