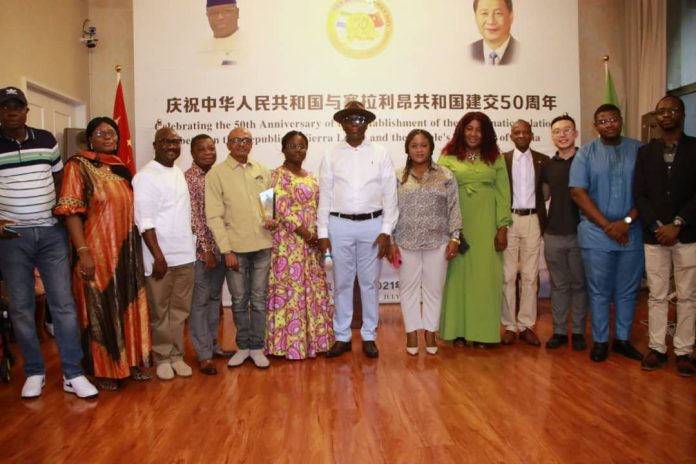 The Embassy of the Republic of Sierra Leone Beijing, China has bade farewell to the outgone Financial Attaché, Mr. Mohmed Salaam-Sheriff, in an event organized at the Embassy Hall. The ceremony was witnessed by other Foreign Diplomats, including representatives of the American Embassy in Beijing.

Delivering his address, His Excellency, Ernest Mbaimba Ndomahina thanked Mr. Salaam-Sheriff for his outstanding contributions to national service, stating that he was a good example to many Sierra Leoneans to emulate whenever they were entrusted with such a responsibility.

Ambassador Ndomahina went on to disclose that it was only during his time that the Mission was able to establish a proper financial department with a robust financial system that promoted the New Direction agenda of transparency and maintaining fiscal discipline.

Receiving the plaque, Mr. Salaam-Sheriff thanked the Ambassador and all other Embassy staff for recognising his contribution, pointing out that it was an honour to serve in the Embassy of Sierra Leone in Beijing, China and that he would forever cherish every moment utilised to serve his country now that he has retired.

Fellow Sierra Leoneans, In July of 2020, I proclaimed the conduct of a Mid-Term Population and Housing Census to be held in December 2020. That...
- Advertisement -