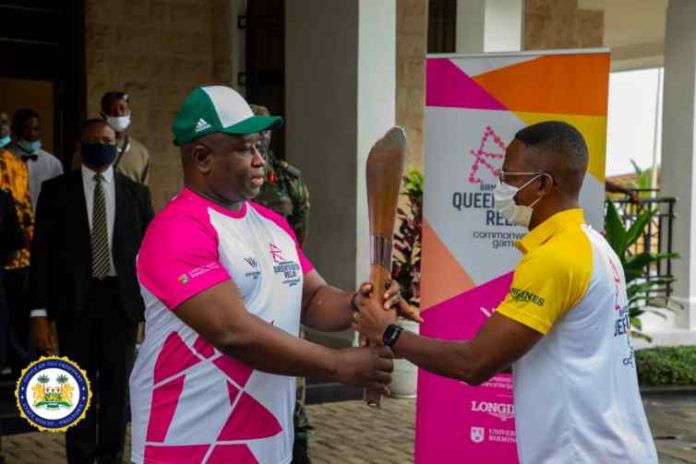 Presidential Lodge, Freetown, Friday 22 October 2021 – His Excellency President Dr Julius Maada Bio has received the 16th Official Queen’s Baton Relay ahead of the XXII Commonwealth Games, an international multi-sport event for members of the Commonwealth that is scheduled to be held in Birmingham, England.

The baton’s 90,000-mile, 269-day journey will travel through all 72 Commonwealth nations and territories, tied together by common democratic principles, common laws, and working together to achieve world peace and stability. The baton is being taken to each destination by courier as part of plans to prevent the spread of COVID-19.

The baton will be handed back to the Queen at the city’s opening ceremony, after an epic journey throughout nations and territories, reaching Europe, Africa, Asia, Oceania, the Caribbean and the Americas.

While receiving the baton from Ibrahim Nyelenkeh, the Minister of Sport, President Julius Maada Bio showed excitement for what he called the true spirit of sportsmanship that had held the Commonwealth nations together, adding that the same spirit should continue.

“I hope that this spirit will continue for peace and development and for greener pastures. Thank you,” he concluded.

The British High Commissioner to Sierra Leone, Lisa Chesney MBE, said she was honoured to have witnessed the occasion ahead of the 2022 Commonwealth Games that would increase true solidarity and core values of the Commonwealth nations. She added that Sierra Leone was the 3rd African nation to receive the baton, after the Federal Republic of Nigeria and The Gambia.

“The best thing for the Commonwealth is by coming together and I think it is a part of the game and it will connect communities,” she disclosed.