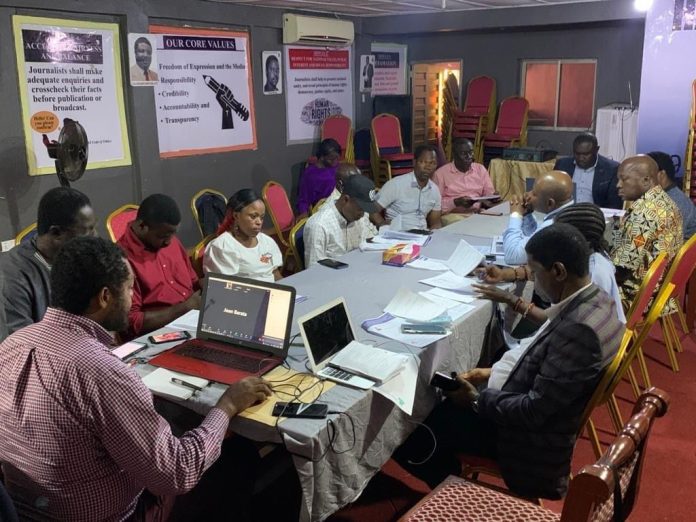 According to SLAJ President, Ahmed Sahid Nasralla, the purpose of the engagement is for stakeholders to look at the Cyber security law again and identify gaps and sections that could be open to abuse of the right to freedom of expression, and to develop strategies for awareness-raising targeting constituent members.

“We know the law is with us now and there’s nothing we can do at this time to change aspects of it. However, as we did during engagements when the law was at the bill stage, it is imperative we continue to highlight the gaps and sections in the Act, especially in the area of offences, that could conflict with fundamental human rights including the right to freedom of expression and free speech online. The essence is for stakeholders to begin to strategize how to influence implementation through awareness-raising and advocacy,” said Nasralla.

Participants at the one-day workshop held on 8th February 2022 at the SLAJ Hall in Freetown, had the opportunity to listen via zoom to international legal perspective on the Cyberlaw delivered by legal practitioner Joan Barata.

Joan used to work with several international organisations and NGOs on matters related to freedom of expression, freedom of information, media regulation, the regulation of online platforms, privacy rights, and other internet freedoms issues.

According to Joan, the main reason or the main rationale for the adoption of cyber laws is always to increase the security of online transactions, to avoid fraud, or the malicious use of the internet, etc. However, he said cyber laws, as with the case of Sierra Leone, in many ways have a negative impact on freedom of expression and of the press.

“These laws (cyber laws) also contained restrictions, the formulation of new offences, granting of very intensive and extensive powers to competent authorities to scrutinize speech, to control speech over the networks, and these laws in many, many cases may have negative implications on the right to freedom of expression. And this is the case with the cyber law of Sierra Leone,” said Joan.

The lead facilitator of the workshop, Dr Francis Sowa, did a presentation on the Cyber Crime and Security Act 2021 highlighting key sections in the areas of offences and the regulatory bodies provided for in the Act. In the interactive session, participants noted the exclusion of the media and civil society in the National Cybersecurity Advisory Council and the fact that the regulatory bodies, which are yet to be established, are dominated by government officials. Participants also noted the lack of awareness of the public about the Cyberlaw and the need for stakeholder groups to embark on the education of their constituent membership on the law.

The SLAJ President said public education on Cyberlaw is crucial because the implementation of the law has already started, and the national elections during which the cyber law is expected to be effectively used are fast approaching.

Participants agreed on the following next steps:

• That advocacy should start with the establishment and operation of regulatory bodies provided for in the Act.

• That SLAJ should work with the Sierra Leone Bar Association to simplify the contents of the Cyber Security and Crime Act 2021 and raise awareness about its provisions.

• Bring in the private sector to support public education drive on the cyber law.

• Issues affecting the work of media should be highlighted to see how the law affects the work of journalists, especially investigative journalism.

• Use of Editorials, Articles, Jingles, radio and TV discussion programmes using the local languages to educate the public, the majority of whom are illiterate.

• SLAJ should engage and partner with student unions to target University students who are mostly social media savvy.

• Mobile Network Operators and ISPs should support public education on the law and tighten security around SIM cards to crack down on SIM box fraud and fake and faceless bloggers.

• IMC, NATCOM and SLAJ should pay attention to online platforms operated by Sierra Leoneans living in the Diaspora but targeting the audience in Sierra Leone.

• SLAJ should also engage and partner with the Entertainment industry to raise awareness.

• Cyber security courses should be included in the University curriculum.

• High schools should start teaching ICT, which will include aspects of cyber security and crime.

• Divide advocacy and awareness-raising into thematic areas. For example, target boys and girls; to ensure that they go into the internet and come out safe.

Meanwhile, according to Nasralla, the engagement session is the first of three workshops that would be held for stakeholders to continue to raise awareness about Cyberlaw and its provisions.