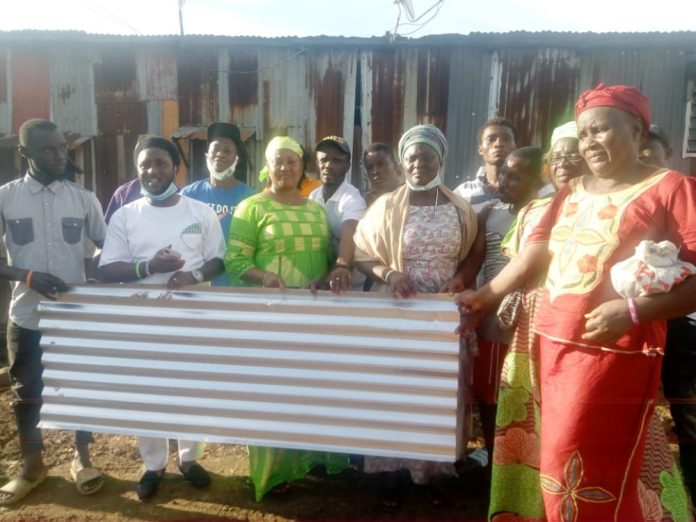 In a bid to identify with those who had their houses burnt during the Genet Lane fire disaster, the Executive members of Constituency 125 representing the Sierra Leone People’s Party (SLPP) on Friday donated nine bundles of roofing zinc to the Kingtom Descendants Association for onward support to the ongoing reconstruction effort of shelters destroyed during the August unfortunate incident.

This gesture was made after the SLPP Constituency Executive had led the Government Disaster Management Team and other goodwill agencies to providing first aid including food to over hundred fire victims currently homeless.

The donation was split into two; three bundles of zinc were given to victims of July 1 flooding on Cole Lane and the remaining six went to support the construction of a big makeshift structure to house the fire victims.

Speaking during the donation, the Chairman of SLPP Constituency 125, Alhaji Komba, said the donation visit marked their second attempt to reach the fire victims and to express how they felt sad about the misfortune that befell them. “We led the government disaster team to the fire scene during our first visit for their donation of emergency items. While the victims were thanking the donors, they asked for roofing zinc to support a plan to construct some shelters. So we have heeded to that call as a political party. The Government has always identified with people during disasters,” he said, adding that they are not happy seeing the victims homeless.

Receiving the donated items, Daniel Max Amara, Community Chairman, said they were happy seeing their plea heard, reaching far and beyond. He thanked the Government through the SLPP Constituency Executive for the timely intervention. “The structure we are putting up is very big, so we need more roofing materials to finish the job,” he disclosed, calling on other donors and well-wishers to support the stride.

On her part, flood victim, Fatmata Kamara, said she lost properties amounting to millions of Leones when the July 1 flooding struck. “I was sleeping during that time. I got up naked with my children. We had to swim out,” she explained, thanking the SLPP Constituency Executive for the goodwill gesture.