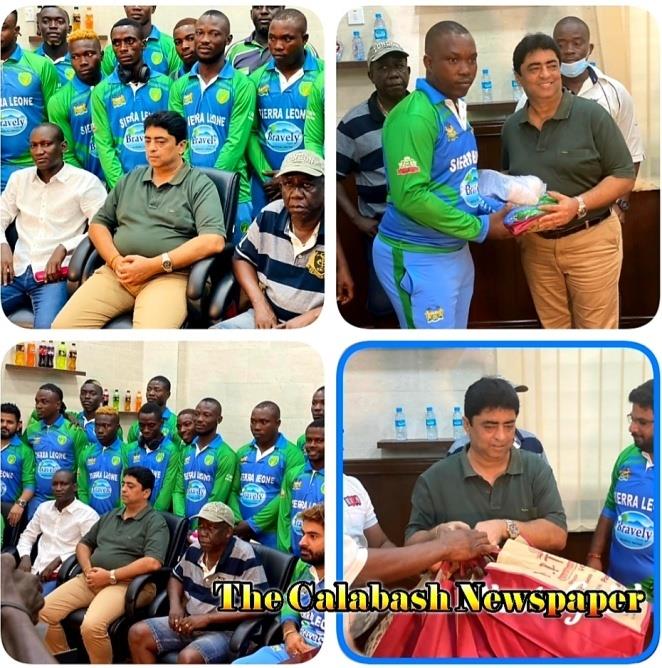 As part of rolling out its Corporate Social Responsibility, two of the most result-oriented companies operating within the country, KADAT Foods & Beverages in partnership with KADCO SL Limited has on the 16th October 2021, rendered support to the Sierra Leone Cricket Association, at KADAT’s manufacturing plant at Grafton, ahead of the latter’s friendly matches in Nigeria in preparation for the T20 World Cup Australia 2022 sub-Regional and Regional Qualifiers events which will be hosted in Rwanda in October and November, 2021.

Before officially disclosing its support, the General Manager of the KADAT, Oliver BM Somasa, former Deputy Inspector General of Police, welcomed all, including the team and its officials, members of the Fourth Estate and representatives of the Grafton community.

He informed all present that the Chief Executive Officer of the company, Kishore K. Parwani,has facilitated the rolling out of a series of development projects to support the Grafton Community mentioning those of offering residents with fresh and pure drinking water to residents for free, positioning of water tanks at strategic locations for residents to fetch water, support given to the resurfacing of the football field for youth recreational activities among others.

He highlighted that the company is not only operating with the sole aim of maximizing profits but to ensure that community development programmes are supported.

Oliver Somasa, who served as Chairman of the program, continued that the company has at this material moment decided to support the Sierra Leone Cricket Association ahead of an international competition in which the team will be participating in Kigali, Rwanda very soon in this year.

He said, as a company, they got the notice for support lately but did all they could, at the moment, to present to the team what they have just provided. He wished the team good luck in all the games they will be playing and enjoined them to do all their best to emerge victorious so that one day they will play India.

Three of the Directors of the company in the persons of GirishParwani, Abu Bakarr Keita (Buba)  and another Indian wished the cricket team good luck informing them that they are looking forward to them bringing the victory trophy to Sierra Leone.

On his part,the Board Chairof the Sierra Leone Cricket Association, Mustapha Kallon, expressed gratitude to the company for the support it has given to the team. He underscored the importance of the availability of funds for the furtherance or enhancement of sports in the country.

The Chairman explained that it is always expected from the national team 20% readiness in tandem to the support that the ICC provides stating that what KADAT has done will help the team greatly meet the 20% in put that it is supposed to contribute in order to become eligible to take part in any competition.

“The support that you have provided will go a long way to boost the morale of the players and help fulfill our requirement,” he stated adding how the jerseys are made up of top quality fibre.

He expressed hope that with the affiliation with the company they will forge a partnership with major international stakeholders in order to take the game of cricket to another level in the country.

The Chairman talked about some of the plans they have in the pipeline to roll out and solicited assistance to develop pieces of land that were donated to the Association.

“We want to make cricket very fashionable in the country and in that direction we want to target the schools where we want to catch them young and starting at that level going forward we will groom great cricket players,” he intimated.

He informed that in Nigeria the team will play six series of friendly matches in Group B were there are other countries like Mozambique, Botswana, Tanzania and Cameroon. Any team that emerges in the 1st position will then play in the Kigali Competition. The highpoint of the occasion was the handing over of the jerseys and trainers to the Sierra Leone Cricket Association.