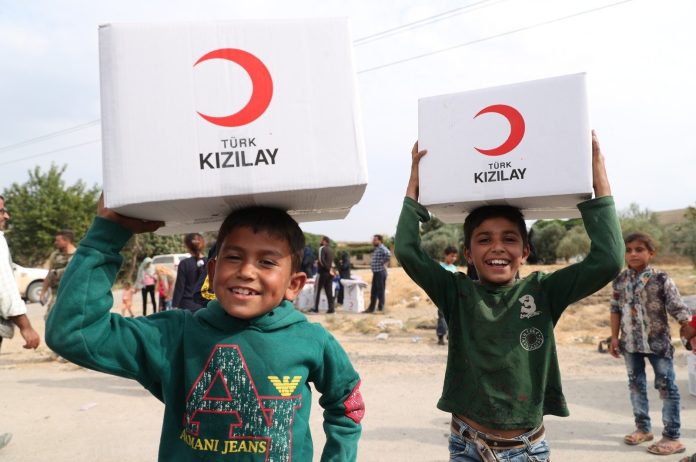 A Turkish International Humanitarian Foundation [IHH] in collaboration with the Aiding Hope Children Foundation Sierra Leone has recently completed the construction of a Junior and Senior Secondary School and Masjid [mosque] to help boost the educational sector in that part of the country, including the Ramadan iftar feeding project in the Mabongisseh Village Ribbi Chiefdom in Moyamba District.

According to the Chief Executive Officer [CEO] of the Aiding Hope Children Foundation Sierra Leone, Dauda Bailor Bah, they have been in existence since 2006 but due to many challenges, it was difficult for them to attract such international humanitarian aid to the country. He commended members of the International Humanitarian Foundation for the support. He said that with the collaborative efforts of community stakeholders and stakeholders of the Istanbul International Secondary School they were able to achieve the milestone in attracting development to their chiefdom. He said that the initiative to construct the Istanbul International junior and senior Secondary School and a Masjid [Mosque] was born out of the desire to support the people of Ribbi Chiefdom in Moyamba District with the needed facilities. He also assured that in 2023 they will commence the construction of a Primary School in the chiefdom. He disclosed that there are many other projects that they will soon start in the various villages in the Chiefdom. He added that these development projects are livelihood support to the people Mabongisseh; more especially the children which he said are the target beneficiaries. Dauda Bailor Bah expressed gratitude to their sponsors and to the entire people of Mabogisseh Ribbi Chiefdom for embracing the development.

The people of Mabogisseh Ribbi Chiefdom in the Moyamba District expressed appreciation to members of the Aiding Hope Children Foundation Sierra Leone for their unwavering support towards their chiefdom and called for more support.