Updates on the Tourism Minister’s Final-study tour in Kenya 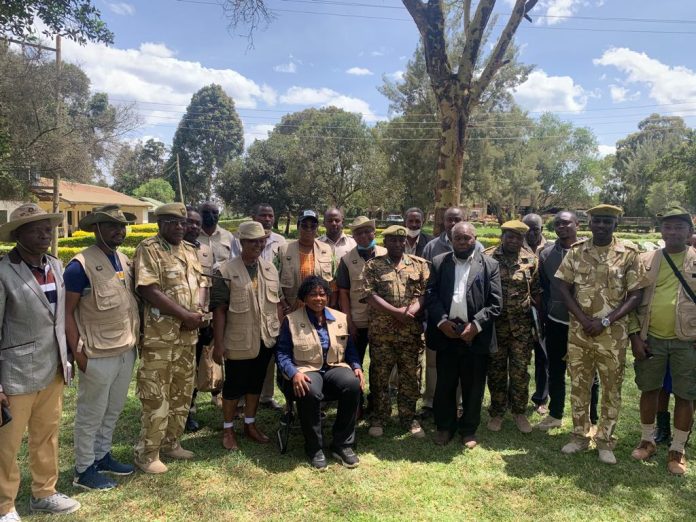 At the Conservancy, the delegation was received by Moses Mathuki, the Chief Operations Officer who made presentations on how the integrated conservation model and revenue generation can be designed; how private conservancies relate with national parks and their relations with government policies in terms of tax and revenue generations; how funding for conservation and community development and ecological management can be solicited; and how private sectors can be wooed into establishing conservancies.

OI Pejeta Conservancy is a private establishment in Lakikipia County , Central Kenya. It is situated on the equator west of Nanyuki, between the foothills of Abadares and Mount Kenya. Also, Ol Pejeta is well famous for protecting the world’s last two northern white rhinos. The sanctuary conserves wildlife, provides shelter for great apes and it generates income through wildlife tourism and complementary enterprises for re-investment in conservation and community development.

Concurrently, multiple presentations were also done at the Meru National Park by Robert Obrien, the senior warden of the park and other officers. The presentations specifically focused on vegetations and climatic conditions of national parks; effective conservation of wildlife and law enforcement; Rhiino Security management; standard operations and monitoring; technology in wildlife management; capacity in building in wildlife Security; community wildlife services; and, cross-cutting issues in wildlife conservation.

Meru National Park is one of the several beautiful parks in Kenya,located in Meru County in Kenya’s Eastern Province below the eastern slopes of Nyambene Hills. It’s managed by Kenya Wildlife Service on behalf of the Central Government. The Meru National Park is ideal for camping, picnicking, and conducting adventures and on safaris. Animals often sighted in the park include reticulated giraffes, zebra, gerenuk, lions, leopards, wild dogs, and the park has more than 427 species of birds.

The final presentations were done at the Aberdare National Park by the senior warden of the park, Mr.Joseph Dadacha. The warden gave a comprehensive overview of the park; the activities of the park such as game drive, bird watching, picnicking, team building etc. He also presented on the effective management of endangered species.

At the end of the presentation, Dr Memunatu Pratt expressed her gratitude to the HE President Uhuru Kenyatta, the Government and the people of the Republic of Kenya. She emphasized the importance of the bilateral agreement and the historical relations between Kenya and Sierra Leone. Also, she praised the Kenyan Wildlife Service that was attached to guiding the delegation in the course of the study tour particularly the team whose patience and dedication was just phenomenal.

In the same vein, the minister praised HE President Julius Maada Bio for the initiative of establishing and giving the infrastructural support as such to building up the wildlife parks in Sierra Leone; she assured the delegation and people of Sierra Leone that such dream will be met and fully realized.