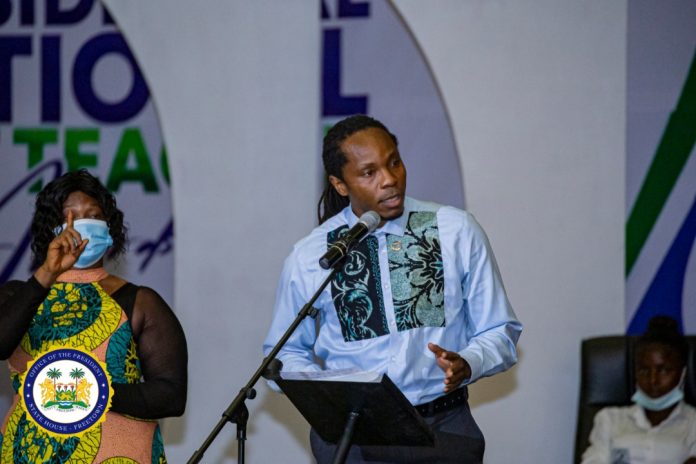 The Minister of Basic and Senior School Education (MBSSE) Dr. David Moinina Sengeh has stated that his Ministry has achieved 100 percent of what was promised in the Education Governance Pillar in the New Direction People’s Manifesto.

He made this disclosure on Tuesday 5th October 2021 during the Maiden Edition of the Presidential National Best Teachers Awards 2021 at the Bintumani Conference Centre in Freetown.

“Under the Education Governance pillar, there and 10 basic education goals starting with you reverting the 6-3-4-4 system to 6-3-3-4. Our planning dedication and coordination are so good locally and internationally and we have the largest multi-donor trust fund ever at USD 72million with 5 major development partners. And as of last week, we are now eligible for up to $40m because of the work we have done,” he said.

He said his team at the Ministry is currently developing the first locally-led Education Sector Plan, noting that the Ministry’s education management and information system is one across the entire continent that has data links for all schools from 2012-2021.

“Sir, you promised to improve the Inspectors of Schools, we have hired 160 new Inspectors of Schools given them motorbikes and tablets and trained them. They have been thorough effective as promised. The School Management Committee that you promised is on course and thousands of them are presently undergoing training. All school board members and secretaries have been trained and each secondary school in this country has been given one tablet each.

Principals use those tablets to report, also all government and government-assisted primary schools will be given one tablet as well,” he said.

“Yes sir we have 100 percent of what we said we will do in the education governance pillar,” he reaffirmed.
He said under the education financing and management theme, the education sector budget has been increased to 22%, adding that there is a public-private partnership framework that will track all donor resources.
He said the National Programme on Civic Education has been launched, curriculum and learning materials have been developed from Class 1 to JSS 3 and the books are on the way at the moment, noting that his will solidify Civic Education which is already in the school time table and that will be completed by the end of this year.

“For the theme of increasing access to functional adult literacy education, we have established 202 centers across all chiefdoms and we’ve been working with organizations to including literacy program into a livelihood for women. We are well underway to achieving that 100 percent as well,” he said.

Dr. Sengeh said the Ministry will continue to develop early childhood education, starting the construction of hotels in three districts, and will support eleven bordering schools by the end of next year.

He said inclusive education is fully supported and the Ministry is buying five buses for pupils with special needs, noting that all districts have effective functional libraries save Falaba.

“We will establish the state of the arts high schools in all regions as promised,” he said.
“Mr. President, you all so promised to make French a core subject in junior and senior secondary schools. I must confess that this will be difficult to achieve as we don’t have that many French teachers, but we will think outside the box. it will also be difficult to achieve a single shift in all schools because we have increased the enrollment by 30 percent, but we will try. We are building 510 classrooms over the next three years,” he said.

He said on improving the condition of teachers, the Teaching Service Commission is more functional than we can imagine, adding that while extending the retirement age of teachers in Science, Technology, Engineering, and Mathematics (STEM), French, Arabic, Agriculture new scheme is needed for teachers in remote areas.

“My team is developing a remote area or village teacher policy that will address this,” he said.
Giving an overview of the selection process that led to the winners of the Presidential National Teachers Awards, the Chief Executive Officer for Teach For Salone, Madam Josephine Saidu said she was honored and delighted to have been a part of the selection process, saying that many stakeholders like members of Council of Principals, Members of Parliament, the Sierra Leone Association of Journalists, the Inter-religious Council and chiefdom stakeholders which she said made the process very transparent and credible.

The World Bank Country Manager, Abdu Muwonge, expressed gratitude and congratulated the government for what he called the huge accomplishments in the education sector, adding that the achievement of the country in transforming education was being echoed everywhere around the world.

“It is important to note that as we gather here today to honour teachers, parents too have a role to play to keep the children in school. Teachers have played a critical role in this country, he stated.
World Bank Country boss affirmed that the bank and other partners would continue to work together to improve the condition of service for the teachers and make the learning environment more comfortable for all actors.
Strategic Communications Analyst MBSSE
Augustine Sankoh