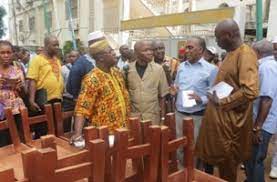 The Bo City Council has on Wednesday 15th December, 2021 handed over 100 benches and 100 desks to the staff and pupils of the Bo Municipal School in Bandajuma Layout, Bo City.

The Bo Municipal School which was established by the Bo City Council in 2013 has been one with loud hues and cries for adequate sitting accommodation to host its 305 pupils and had for some time made that challenge known to the council. In 2019, the Bo City Council provided 51 sets of benches and desks to help salvage the sitting menace which existed in the school; but more needed to be done.

Addressing the school’s administration, the pupils and their parents in a Christmas and End of year activity organized by the school administration, Chief Administrator of the Bo City Council, Veronica J. Fortune expressed she was impressed with the organization of the function for the children as such occasions help the children “unlock their unknown talents, skills and abilities.” Madam Chief Administrator stated that as a Council which is regarded the proprietor of the Bo Municipal School, they have on several occasions seen the children suffering for where to sit in school and have also been hearing the cries of the administration and the Community, Teachers Association (CTA) and thus to wipe away those tears, the Council has brought 100 benches and Desks. She charged the parents to monitor their children after school and endeavor they read their books daily so as to yield good fruits. “Bo Municipal School has so many cries and we will fight hard to solve all your problems systematically; this is just the beginning,” she went on, and ended up by wishing the pupils, administration and parents a Merry Christmas and happy New Year.

With smile covering his face, the Ward Councilor of Ward 266, Joseph PumagoiFoday reminded the people that they cried for myriads of things during the last Ward Development Committee meeting and such included sitting accommodation for the Municipal school in the Ward. CouncillorFoday informed the people that “the Bo City Council does things gradually in lieu of rush” and so out of such systematic approach, has come the furniture. He revealed to his constituents that the provision of these furniture became possible with funds from the own source revenue and so encouraged his people to always pay their taxes so as to get more development from the Bo City Council.

The Deputy Mayor of the Bo City Council, David J. N. Smart, symbolically handing over the furniture, made a retrospect that he met three major problems ranging from land, sitting accommodation, to pin code for teachers, when he first visited the school in 2019 and thus when the substantive Chief Administrator was posted to Bo City Council in mid-2020, he brought all such to her notice and gradually the Council repaid for and secured the land for the school and further provided 51 sets of benches and desks. The Deputy Mayor informed the gathering that Bo City Council wants to make the issue of sitting accommodation a thing of the past in Bo Municipal Primary School, Bandajuma layout; and so stressed to the head teacher of the school that with the additional provision of furniture, “the council wishes to see two pupil per bench and nothing more as there is enough for everyone.” Deputy Mayor Smart says this is in line with President Bio’s stride of providing quality education: “when they are clustered together, the quality becomes a problem but when the kids are conveniently seated, then Quality education is assured.” He urged the administration to take fervent care of the furniture and ensure they earnestly repair any broken furniture “instead of taking it to the kitchen to use as firewood.” The Deputy Mayor ended up by encouraging the people to ensure they get counted in the 2021 Mid-Term Population and Housing Census for more development, and sternly debunked that the exercise is for no political gain.

Showing appreciation for the furniture brought to the school by the Bo City Council, the Head Teacher of the Bo Municipal Primary School, Bandajuma Layout, Mrs. Gladys Brima stated that accommodation problem is now history. She went on to say that her school has lots of teachers whom are not paid by central Government and the only way they survive is from the little subsidy which the school receives and thus, she appealed to the Council to seek ways to ensure her staff are pin coded.