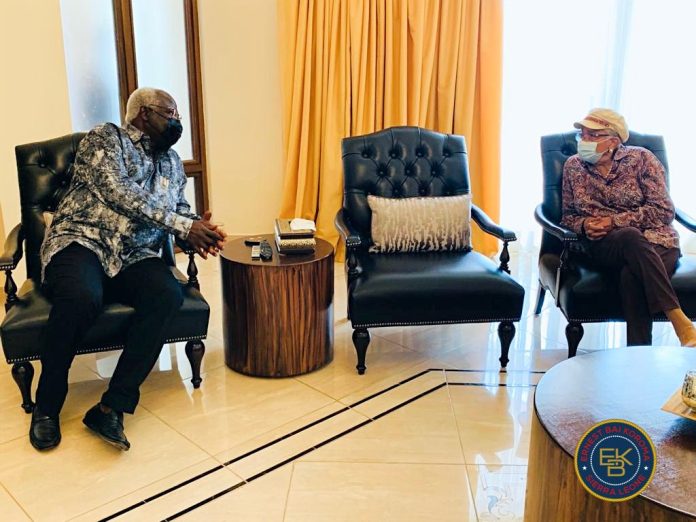 Former President of Liberia, Ellen Johnson Sirleaf, today paid a courtesy call on her colleague former President, Dr Ernest Bai Koroma, at his Robureh home in Makeni, northern Sierra Leone. Sirleaf’s visit came within days after both leaders were honoured past Monday in Niger with the African Medal of Merit in Leadership by the African Bar Association.

Ellen Johnson Sirleaf, a Noble Peace Laurette and Africa’s first female president was the 24th President of Liberia. Liberia is one of Sierra Leone’s closest neighbours with strong social, cultural and economic ties.

Her visit to her colleague former Head of State emanates from a shared interest to promote peace, security and democratic good governance in Africa and beyond.

It would be recalled that during President Koroma’s tenure, Sierra Leone was reckoned by the Global Peace Index as the most peaceful country in West Africa and the third most peaceful in the whole of Africa.

Both former leaders held fruitful discussions on these shared interests and reminisced the good old days when they both made remarkable progress in their countries development trajectories.

President Koroma was delighted to receive his colleague former president.

“I am pleased to have hosted my sister and colleague advocate for peace and democracy in Africa. Former President of Liberia, Ellen Johnson Sirleaf is an inspiration not just to her native Liberia but for Africa and the rest of the world”.

Describing her as a dependable friend and sister, the Sierra Leonean statesman also expressed profound appreciation for the special efforts the former Liberian Leader usually makes to visit him in his home town.

“Each time she is visiting Sierra Leone, she would make time to drive 189 kilometers all the way to my home town of Makeni to see me. She is indeed such a great and dependable Friend and Sister,” said former President Koroma.