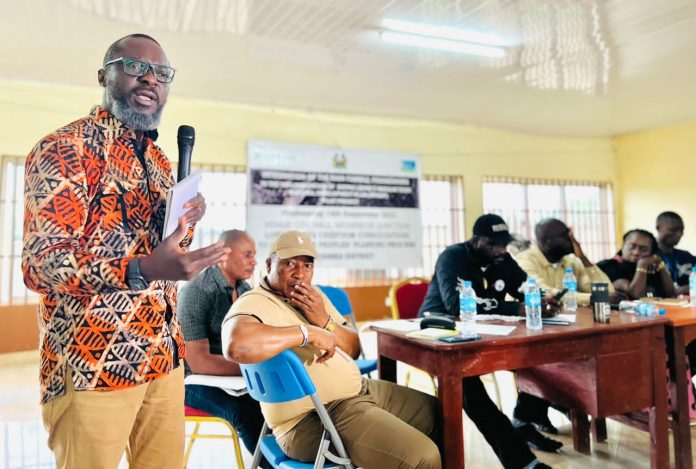 The framework is an inclusive governance model aimed at putting the people at the centre of development and socio-economic transformation by ensuring improved service delivery, sustained poverty reduction and strengthening peace and cohesion.

It also includes elements of reconciliation and peace building in the development planning processes led by the people and local communities.

Welcoming the participants, the Paramount Chief, Kamajei Chiefdom, Fayia Sundufu Sovula said they have waited for too long to commence this initiative, noting that it would be the right way to bring development to Lower Banta.He said as the National Secretary General of Council of Paramount Chiefs, he would provide all the necessary support in order for the initiative to succeed.

In his opening statement, John Caulker, Lead Strategist (WFNF) and Executive Director of Fambul Tok International-Sierra Leone said the initiative was a laudable one developed by government to bring the people closer to the development of the country. He said it was important for people to begin discussing their own issues within their respective communities and districts.

John Caulker said the framework which would be anchored in the district councils would be a platform for the people, local authorities and Councils to come together and discuss their issues and development priorities for the betterment of their localities, adding that the PPP was a one-stop-shop that would help to bring people at the centre of development in the country.

He affirmed that in the coming days, Staff of Fambul Tok International would work in all the villages in Lower Banta to ensure that the Village Development Committees are set up with the people taking the lead in developing the VDCs.

The Director of NGO Affairs at the Ministry of Planning and Economic Development, Eric Massally, in his statement said in order for government to back its commitment with action, they have provided financial support in the national budget for fiscal year 2022 to implement the integration of the Wan Fambul Framework in the implementation of the Sierra Leone’s Medium-Term National Development Plan (MTNDP) pilot project in selected chiefdoms.

Director Massally noted that importance of NGOs in complementing the efforts of government and urged the people to make use of the opportunity by collaborating with development partners, especially NGOs operating in their localities.

On her part, the Mammy Queen (Chairlady) Lower Banta Chiefdom, Baby Kelfala said that the women should play a pivotal in developing the structures of the VDCs in all the localities, adding that must not be left behind in the every process of development in the community. She assured the government of their commitment to the project.

In his keynote address, the Director of Local Government, Mr Combay said as a government they remained committed to ensuring that communities are at the centre of local, district and national development through the application of the People’s Planning Process

He noted Government has relentlessly worked with development partners, especially Fambul Tok and Catalyst for Peace to develop the initiative and ensure the people are at the centre of development in Sierra Leone.

Launching the initiative, Director Combay called on every stakeholder to be firmly behind the WFF, assuring them of the Government’s commitment to the process.

The WFF has been piloted in four districts namely: Kailahun, Moyamba, Kono and Koinadugu. Government has decided to adopt and roll out the framework in the 190 chiefdoms and 16 districts of Sierra Leone.