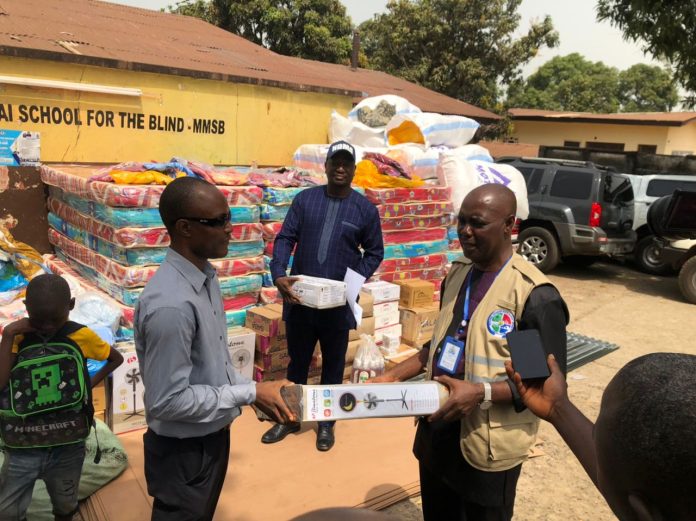 Freetown, March 4th 2022 — The National Disaster Management Agency (NDMA) with support from Save the Children and All for One Foundation today donated huge consignments of non-food items to the Milton Margai School for the Blind fire victims at its Wilkinson Road School.

It could be recalled that on Monday 21st February 2022, the NDMA reported a fire incident at the school that burnt down the entire senior dormitory and destroyed properties worth millions of Leones. The NDMA was swift to alert the Sierra Leone National Fire Force to put out the fire and quickly discharged its assessment officers the following morning to comprehensively assess the magnitude of the damage caused.

The National Disaster Management Agency, through its Directorate of Relief and Response also held a meeting with partners and presented the assessment report which captured host of relief items needed to cushion the effect of the inferno.

Fortunately, Save the Children and All for One Foundation, two distinguished NGOs responded in the affirmative. They made profusion of large quantity of non-food items available to the NDMA for onward presentation to the school. The items include Mattresses, Zinc, Ceilotex, Standing fan, Bed Sheets, Sanitary Pads, Pillows, Hand sanitizers amongst others.

Presenting the items, the Director of Relief and Response, NDMA, Sinneh Kamara started by thanking Save the Children and All for One Foundation for their timely response and continued support to victims of disasters across the Country. He further noted that ever since the fire broke out, the NDMA has been in constant touch with the school authorities, partners and well-wishers to capture the immediate needs of the school and solicit support where possible to effectively respond to the victims.

Director Sinneh also said that he was happy to present the donation. “I’m happy to present these items to you this morning, I was here when the fire broke out, I saw the damage with my eyes, I know most of you don’t have mattresses to sleep on, but today, you will again sleep on soft mattresses with pillows and get back most of the amenities you lost to the fire.” He said.

Akim Sheriff, Operations Manager, Save the Children express his delight that as an organization, they were able to promptly mobilize the needed resources through one of their donors, Irish Aid to purchase the needed items. He went on to appreciate the coordinating role played by the National Disaster Management Agency and ensuring the seamless presentation of the items to the school victims. He also pointed out that Save the Children has been supporting the blind school in several areas and will always be there to support when there is need.

The Chief of Corporate Services, NDMA, Kai Banya zoomed in on the significance of the NDMA and why HE Julius Maada Bio was right to have established such an Agency. “There was wisdom in the decision of HE Julius Maada Bio to have established the NDMA as a stand-alone Agency to manage disaster-related matters in the country. Since its inception, the NDMA has responded to 127 incidences of disasters across the country and the Agency is poised to respond to recent fire outbreaks within the country in coming weeks. So, the significance of the NDMA cannot be overemphasized. Let me, on behalf of the Director-General, NDMA, Lit. Gen. (Rtd.) Brima Sesay, thank Save the Children and All for One Foundation for providing these relief items. It underpins our collective efforts in helping victims in times of need.” He surmised.

Representatives from UNICEF, Ministry of Basic and Senior Secondary Education and Freetown City Council made statements of commitment to respond in the coming weeks, citing that items in-store does not meet the current needs of the victims. They said plans are now on the way to procure the needed items for onward delivery to the school.

The Head Master of the School, Saliue Turay, conveyed his appreciation to the NDMA and its partners for the kind gesture extended to them at this difficult moment. He said the donation demonstrated the level of attention the NDMA places to special needs education in the country. He said the donated items will go a long way in helping to recover from the inferno.

He further appealed to NDMA, the Ministry of Basic and Senior Secondary Education and other partners to find ways of re-constructing and equipping the school for them as most pupils now sleep on the floor in the classrooms.

“I’m also drawing the attention of our potential donors who wish to re-construct our school building to please hire the services of professional electricians to do the wiring installation to avoid a reoccurrence of this incident. This building is more than 40 years old and this is the second time we are experiencing a fire outbreak as a result of electrical malfunctioning. We are dealing with visually impaired pupils, so we need to minimax the occurrence of fire outbreaks within the school.” He appealed.