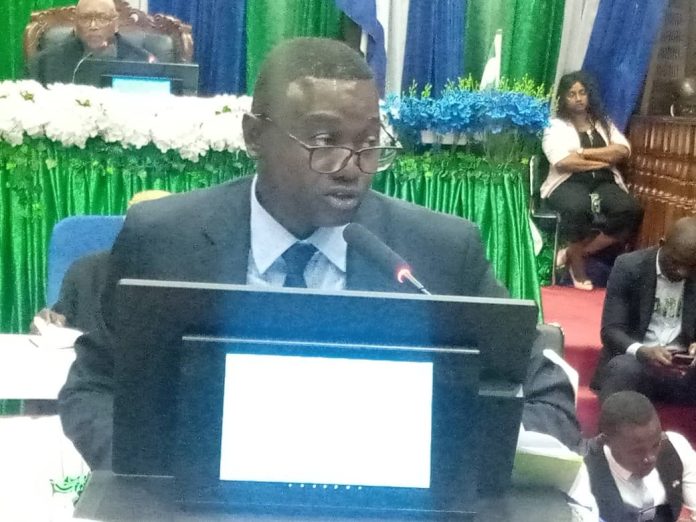 By Parliamentary and Public Relations Department

The Parliament of Sierra Leone has enacted into law, the bill entitled “The Deposit Protection Fund Act, 2022”, with some amendments, for the financial security and economic development of the State.

The bill seeks to establish a deposit protection fund and to provide for other related matters.

Presenting the Bill to Parliament, the Deputy Minister of Finance, Sheku Ahmed F. Bangura said the bill would predicate on International best practices and would trend on the deposit protection fund. He informed that, the bill is divided into twelve parts, and went further to explain the importance of the bill, in light of transformative development in the financial sector.

In his contributions, the Parliamentary Chairman of the Finance Hon. Francis Amara Kai-Samba said the bill is a safeguard for  people dealing with various financial institutions and recalled how banks have failed and customers lossing their money. He said the bill would build public confidence and protection of customers. He described the bill as an important apt for the promotion of growth and progress of financial transaction.

Hon. Dr. Mark Mahmoud Kaloloh said the bill was long overdue and they as the opposition would always support what is good for the state. He expressed optimism over the bill. According to him, the bill would enhance the payment model, and license institutions or specialized institutions would enjoy the implementation. He said licensed member banks of specialized deposit-taking institutions are automatically members of the fund. He also said payment of premium shall be deducted from the member institution’s account at the Central Bank and credit to the fund account.

The MP Further, requested the Deputy Minister to tell the House about the grace period for the international partners, in light of implementation. He asked his colleague MPs to do justice to the document and passed it into law.

On his part Hon.  Alieu Ibrahim Koyo Kamara thanked the Deputy Minister for piloting the bill and further informed that, Sierra Leone had been lagging behind in that direction. He related the development to President Bio’s manifesto that geared toward financial safety net and stability.

He questioned the minister about how the bill would protect the depositors and enhance public confidence as well as financial systemic stability.

“This bill will put Sierra Leone on a wall for the best practice”. He concluded.

Hon. Abdul Karim Kamara recalled how people were afraid to deposit at commercial banks as a result of bad experiences.  He also used the opportunity to extend the protection of citizens dealing with other financial institutions. He recalled the wealth Builder situation and went on to raise concern over the robust implementation to protect compatriots.

Hon. Dr. Roland Kargbo commended the Deputy Minister for bringing forth the document and used the opportunity to explain the trust and confidence the bill would instill. “With this Act coming into power, when my money gets into a problem I would be confident to have it” he informed. He expressed disappointment over the lackadaisical nature of certain institutions, relative to refusal to implement good laws. “We are clear that, this document is not controversial,” he said and urged his colleague MPs to pass it into law.

Concluding the debate, the Acting Leader of Government Business, Hon. Bashiru Silikie  said the State needs protection, especially in the financial institutions. He recalled instances of robbery of compatriots by financial institutions.  He informed that, it would be prudent to improve on robust implementation and described the bill as ‘a modern law”.

In another development also, the Deputy Minister of Planning and Economic Development Rev. Jonathan Taitus Williams has on Thursday 17/11/2022 introduced the bill entitled “The National for Civic Education and Democracy Act 2022, to the Parliament of Sierra Leone

The bill seeks to provide for the establishment of the National Council for Civic Education and Democracy for continuous nationwide civic education on the roles and responsibilities of citizens, the duty of patriotism and nationalism, to provide development communication for government and partner programs to the people of Sierra Leone and to provide for other related matters.

Presenting the bill to Parliament, the Deputy Minister of Planning and Economic Development said the bill was a policy decision taken by the cabinet to promote civic education nationwide and went on to say that, President Bio’s administration is fully in support of the initiatives. He said in the 1980s, civic education was part of the educational curriculum strategy. He disclosed that, the establishment of civil education would enable the government to provide a critical role in inclusivity and aid civic participation for all.