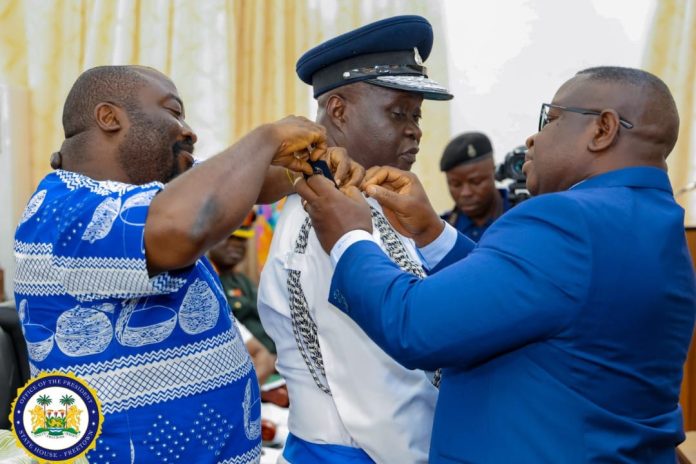 State House, Freetown, Monday, 22 August 2022 – His Excellency President Dr Julius Maada Bio has decorated newly appointed Inspector General of Police, IGP, William Fayia Sellu, and the Chief of Defence Staff, CDS, Major General Peter Kakowou Lavahun in a brief ceremony.
He congratulated them, emphasising that their promotions were from God but also impressing on them that the tasks ahead were enormous.
“At a point in time in the world when things are not very steady, we have emerging and overlapping issues. We have to rise to these tasks. The police are at the forefront daily to maintain law and order and keep the peace, while the Republic of Sierra Leone Armed Forces, RSLAF, defend the territorial integrity of our nation.

This is by no means a menial task,” he said.
President Bio further stated that it was expected of the police and the military to defend Sierra Leone’s citizens and provide a space for all to be peaceful, adding that the recent event on August 10 had shown that there were people hell-bent on disturbing the peace and harmony of the country.
“Unfortunately, we have our compatriots who are equally determined to break that resolve to keep us safe and united as a nation. They are so determined to even incite the military to take over,” he lamented, adding: “The task on your shoulders is heavy, but it has to be performed with diligence if we are to feel safe and carry on like other decent societies in the world”.
“We must make Sierra Leone safer in the first place because it is in that ecosystem of safety and security that investments and other good things will take place. This is why we are particular about peace and security, and we want to make sure that we can provide the jobs that young people need.

“It takes the collective efforts of every society to create that stable environment, which is why we cannot leave the peace and security of this country in the hands of the police alone,” he noted and assured the police of government’s commitment to investigating the August 10 insurrection that led to the killing of police officers and other civilians.
While administering the oaths to the IGP and CDS, Secretary to the President, Dr Julius Sandy, stated that subject to Section 157, and Section 168 of the 1991 Constitution, Parliament had approved the appointment of William Fayia Sellu and Major General Peter Kakowou Lavahun as suitable to serve as the IGP and the CDS of the Republic of Sierra Leone on Thursday, 4 August 2022.
Having fulfilled the constitutional conditions, the gentlemen were allowed to take the oath of their respective offices, decorated, and proceeded to sign the government register.