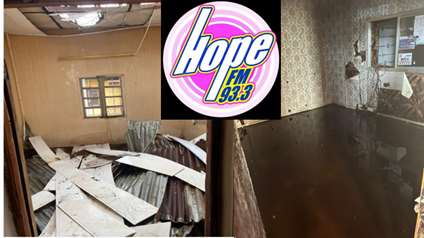 An estimate of over three hundred thousand New Leones (Le300 million old Leones) is projected after window shopping as an amounted needed to rebuild the City Media Center in Mekani City following a devastation caused by heavy rain storm on Thursday 1st September 2022.

The management in Makeni is currently worried following a thunderstorm that swept through Field Road in Makeni taking away the roofs of the building housing HOPE FM:93.3 and Provincial Times NEWSPAPER.

The same storm did the same to the building housing City Bar and Restaurant and City Unisex saloon on 46 Rogbaneh Road.

Other buildings are also affected including the Makeni City Council building at the Main Lorry Park.

“We lost key equipment and documents to the torrential rain that followed thereafter,” says the Chief Executive Officer, Stanley Bangura Junior, and added that given the current predicament they are currently off the air until they are able to fix a new roof and replace the affected equipment.

After a thorough impact assessment of the damage caused by the heavy rains, a technical team’s report suggested that 82% of critical equipment was affected by the water.

The Team furthered that the roof and ceiling of the affected building hosting the CMC office need an urgent exclusive overhaul.

“After post-disaster test on the said equipment, it was discovered that only about 17% could be repaired, while the remaining 65% were damaged beyond repairs. These include a 600watt transmitter, two mixers, six desktops used for recording, editing, and production, eight portable studio speakers, two Apple laptops used for streaming on Radio Garden, our websites, etc.” the Team revealed and furthered that critical documents relating to the CMC work, plus tens of novels and media literature were also destroyed by rainwater.

City Media Management has stated that the loss incurred is so huge that it cannot hastily project a definite date, but it will certainly run into weeks, if not months if only left with our current economic situation to handle.

“We are weighing our options on possible temporal relocation if we can secure key equipment,” they stated.

The Management expressed profound gratitude and appreciation to its numerous callers, messages of sympathy, prayers, hope, and assurances received from family members, friends, colleagues, and partners, following the devastating thunderstorm that seriously affected their institution in the early morning hours of Thursday, 1st September 2022.

“Our doors are open to all those kind-hearted people who may wish to come to our aid in difficult times like this,” CMC Management stated.